On May 8th and 15th, 2021, Professor Matheus Batalha facilitated two sessions of a virtual Pre-Texts Workshop from Aracaju, Sergipe, Brazil. The first meeting had 25 participants and the second 20. The majority being higher education students. 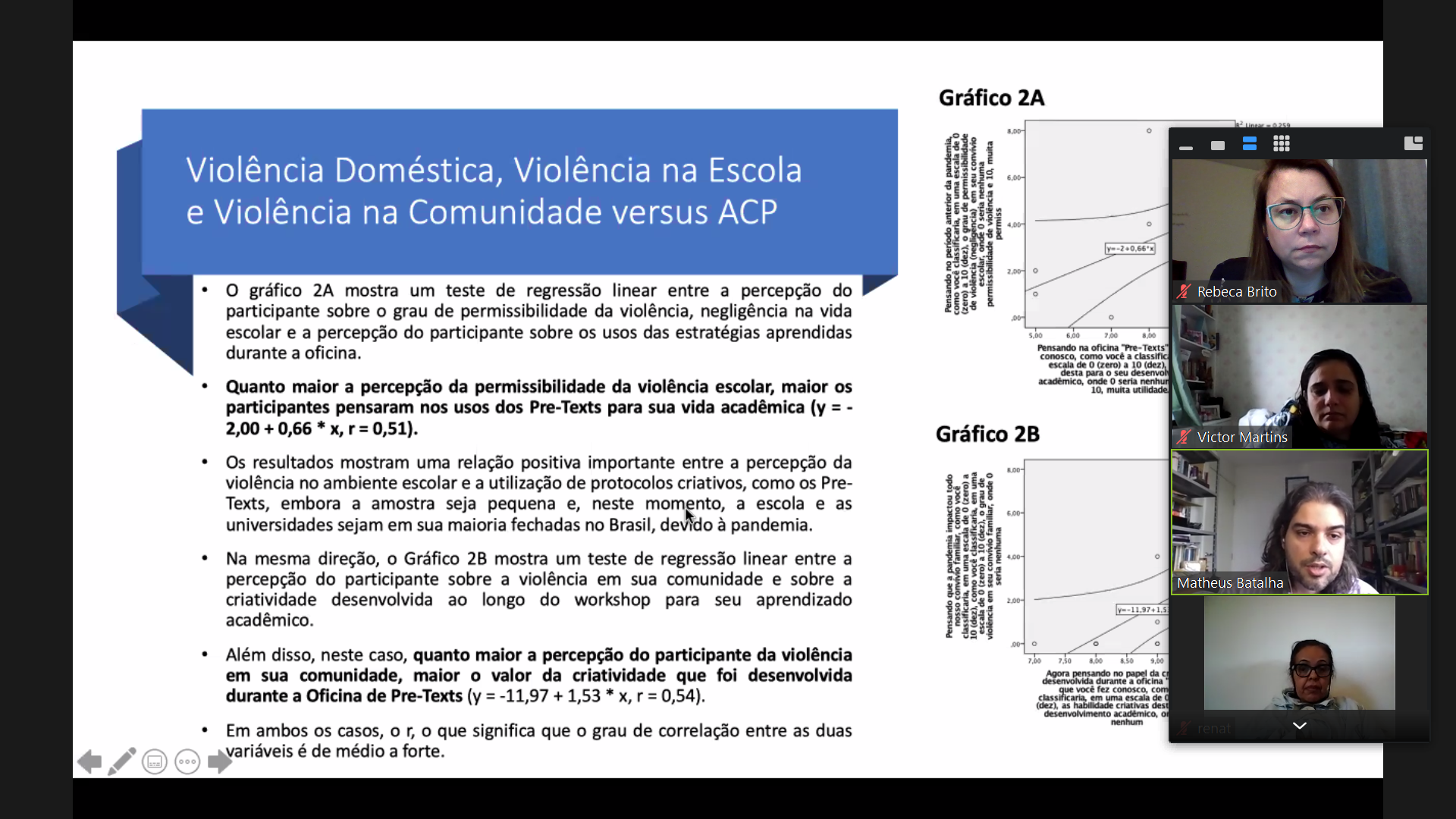 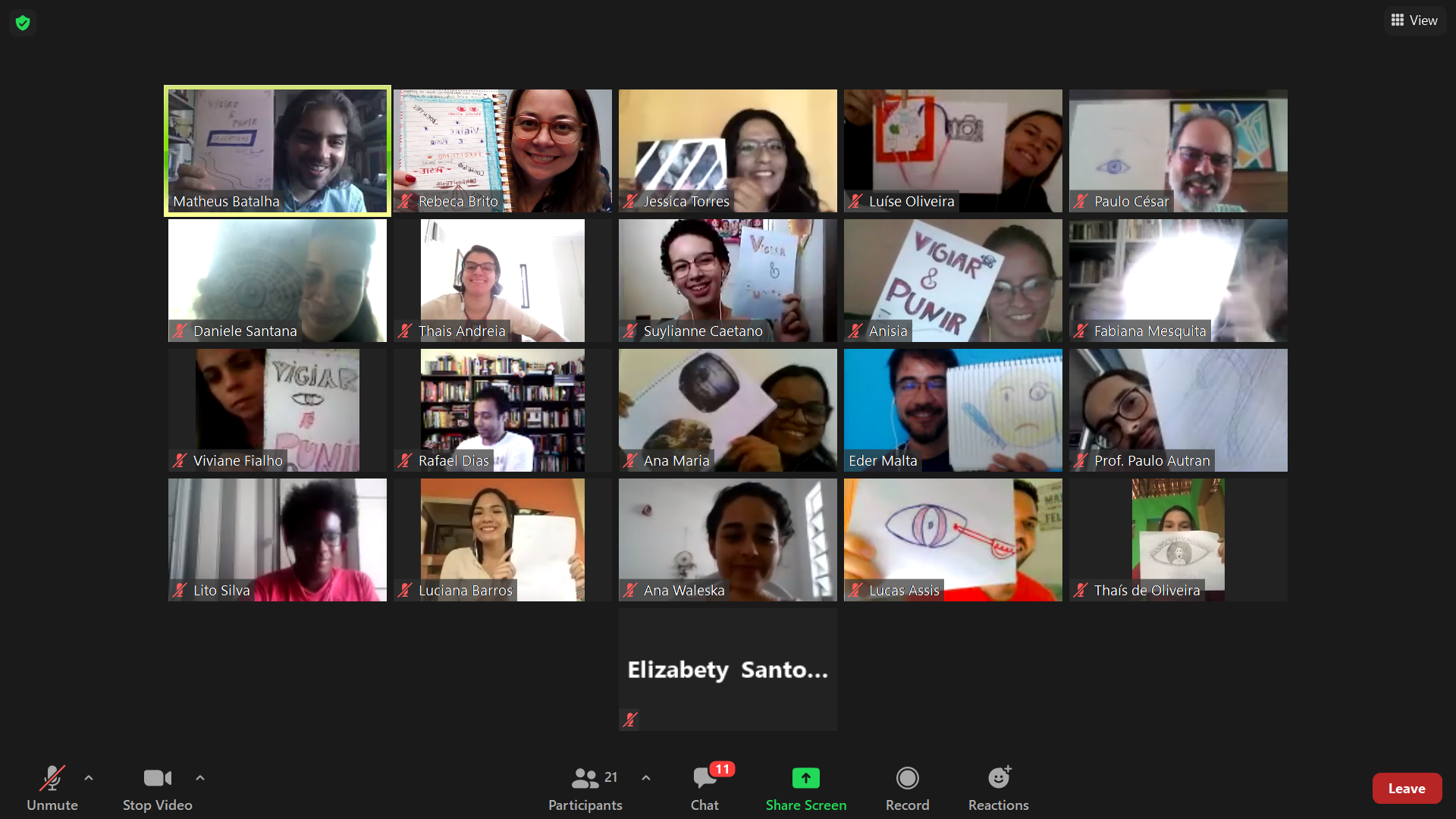 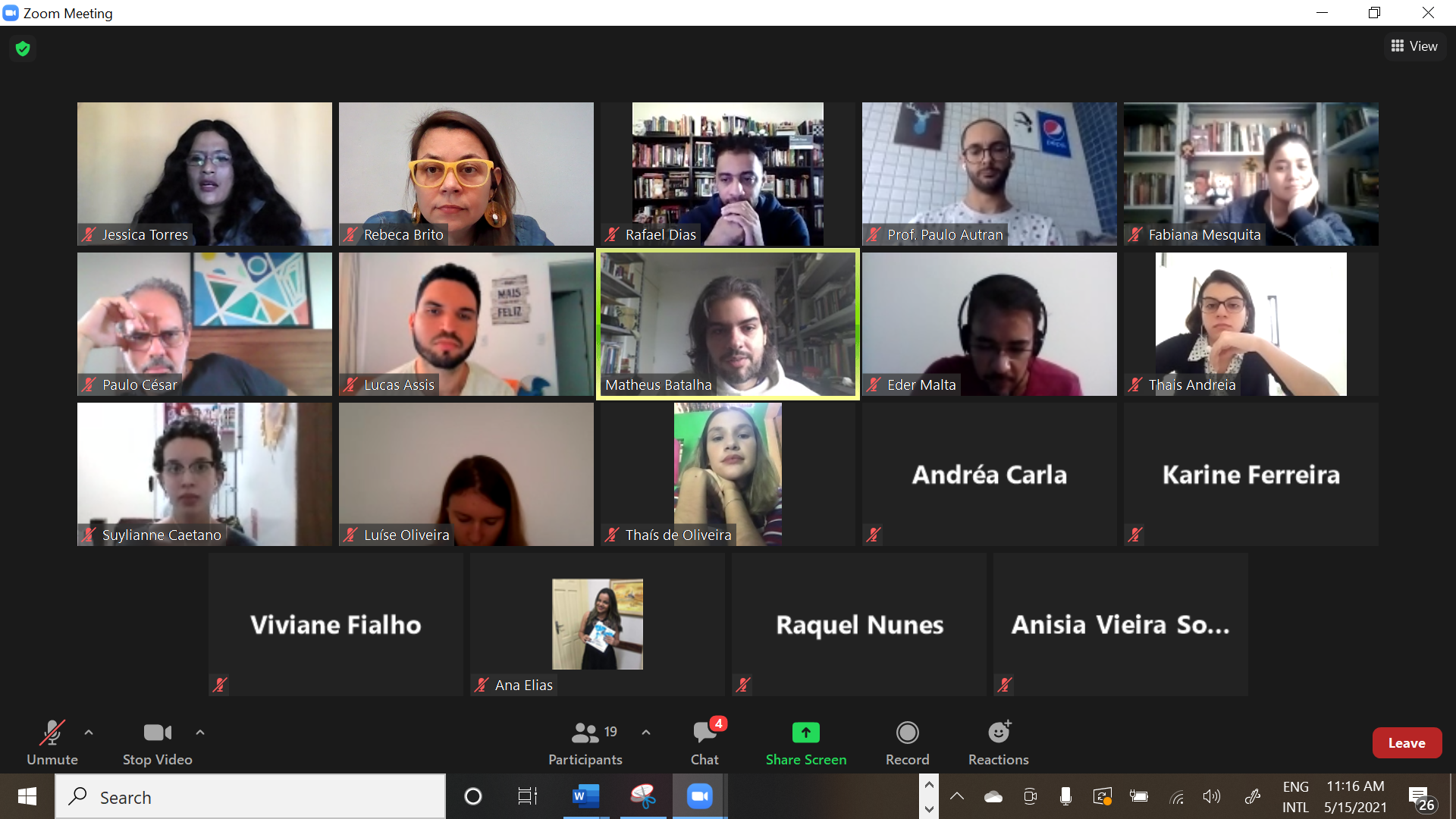 The idea was to provide students with some elements of the Pre-Texts protocol to help them in their academic tasks. The workshop was the pilot of a bigger project related to violence at school. Matheus had the collaboration of the professors Paulo Autran and  Eder Malta, and the students Eloá and Thaís.

(…) Pre-Texts, the protocol that we had used that morning, was constituted as a “human technology”. (…) there is no technology that still overcomes the need to foster critical thinking among students. Humanly, we, the teachers, are the persons who reveal to students that books cannot be treated as sacred objects. It is necessary to make them lose their fear so that they can turn literature into raw material for new productions and for acting in the world. Without critical thinking, there is no nation that can sustain itself.

As soon as I entered, the attendant took a copy of the Jornal da Cidade newspaper, folded it up, and handed it to me saying “good morning”. I had driven to that convenience store for, in addition to picking up a copy of the newspaper, buying sweets for breakfast. I follow a well-balanced diet. During the week, I get up early and make my breakfast with fruits and strong coffee. On Saturdays, I run away from this routine, and I like to allow myself to read the newspaper while savoring some sweets. It is almost reminiscent of my childhood days, when, on weekends, I had a little more freedom to enjoy life, than on
school days. I quickly grabbed a variety of pastries and a jar of fruit salad for my wife. She would only be up in a few hours when I would be immersed in an academic activity. “Little gestures are always healthy,” I thought to myself. At that point, my smartphone vibrated incessantly with incoming messages. A small team of colleagues was waiting for me to close the last details for the event that would take place in half an hour. I ran through the messages, realizing that I needed to hurry. “See you next Saturday”, I told the attendant as soon as I paid the bill. It was time to fly home.

I dropped the shopping bag in the fridge and headed straight for my library. The urgent tasks were simple: check if a certain link was working, leave the file with my notes open and start the virtual meeting room. For weeks, we had prepared a pedagogical workshop for higher education students based on a protocol developed in the USA. The idea was to provide students with some elements of this protocol to help them in their academic tasks. To this end, we selected twenty-five students interested in building projects in Education, the vast majority of them from Sergipe state, and a few others from
institutions such as USP, UFPEL, UFRJ. Upon saying good morning, I realized, by the accent of their voices, how diverse that group was. I thanked everyone for their presence and said that our biggest goal that morning was to encourage the practice of reading complex texts in a playful and artistic process. In doing so, we seek to expand our cultural capital and help students’ self-esteem. As I spoke, I noticed that it was important to make them lose their fear. I had prepared an icebreaker for this and soon asked
everyone to introduce themselves quickly and designate an adjective for themselves with the first letter of their name. “For example, I’m “Matheus Maravilhoso”! (Matheus, the wonderful) Why not?” I completed in a playful tone. One by one, laughing, all the students were playing symbolically with their adjectives, and, almost as if by magic, that group of people, who had never known each other until then, became cohesive. To stamp out any other negative energy, we did a quick yoga practice led by one of the
teachers who make up our team.

Without much ceremony, I informed the participants that we were going to work that morning with a short excerpt from the book Discipline and Punish, written by the French philosopher Michel Foucault. To that end, I asked everyone to create a cover for this book. This activity, inspired by the Argentine cartoneras, that after the economic crisis of 2001, started to publish low-cost books, with creative covers made of cardboard, would serve to create a sense of ownership over the material. Through the little windows in the virtual room, I saw that the participants were having fun like children creating their book
covers with whatever material they had at hand. As if I wanted nothing, I asked one student to volunteer to read the excerpt that we had separated from the text. “These are the measures that were necessary, according to a regulation at the end of the 17th century, when the plague was declared in a city” read the student who had volunteered in a calm tone. As he progressed in reading and communicated the sanitary measures adopted in that crisis to everyone, I realized that the students’ faces had shifted to a
state of attention and seriousness. After the first reading, I asked people to calmly examine the three pages of the text and proposed that, in sequence, we do a new collective reading. This time, everyone should think about a question, some curiosity, or something they would like to know more about. “What is panopticism?”, Asked a student, who added that, at that moment, she preferred to ask the question of the group than simply throw her doubts on Google. From then on, the questions emerged in an increasingly complex way with enormous ease, highlighting multiple points of view about the excerpt we had read. After the round of questions, I asked the participants a central question: “what did we do?” I asked in a light but professorial tone. Like a mystery in which someone searches for answers, one by one, the students were listing cognitive and emotional elements for the activities of that morning, connecting the history and the complexity of reading with the tense moment we live in Brazil currently.

“From the unknown to the intimacy”, I thought while admiring the questions and answers that the participants voluntarily presented to the group. At the end of our workshop, I asked the participants to choose another piece of literature, which could be a poem, a short story, etc., something that connected in some way with the text we had worked on that morning, and to publish their excerpts anonymously. on an online link that I shared. The idea was to create a new sense of collective admiration through a community publication to be worked on at our next meeting. I saw the smile on the students’ faces
when I said goodbye in the virtual room. Minutes later, killing my hunger with coffee and sweets, I remembered that Pre-Texts, the protocol that we had used that morning, was constituted as a “human technology”. It is very easy to be enchanted by technological gadgets that are constantly evolving. In Education, the promises are many, ranging from low-cost computers, called raspberry pi, a pun for raspberry pie, to digital transformations that, due to money or necessity, deepened enormously due to the pandemic. However, if there is one thing I learned in these pandemic times, it is that there is no technology that still overcomes the need to foster critical thinking among students. Humanly, we, the teachers, are the persons who reveal to students that books cannot be treated as sacred objects. It is necessary to make them lose their fear so that they can turn literature into raw material for new productions and for acting in the world. Without critical thinking, there is no nation that can sustain itself.

Education Around the World 📮 (mailchi.mp)