“In the last two years, one of my greatest pleasures is participating in the Pre-Texts workshops organized by Cultural Agents in public schools in Sergipe. With the support of Fapitec Sergipe and Harvard Drclas we trained 25 teachers with the Pre-Texts Protocol. Now, we are continuing the project, implementing its uses with students. As time goes by and the tensions of the world run high, at Ivo Prado State School, thanks to the brilliant leadership of the teacher Magali Barros, we are doing this art education work every Saturday morning. In addition to being a moment to take all the pressure off the week, Eloá and Lucas are taking the opportunity to write their monographs, in a project that started back there, when we won resources from Fapitec. In addition, in these moments, I feel like a child again… May this week, when we dedicate a holiday to our children, we can carry this feeling of gratitude with us!” (Matheus Batalha) 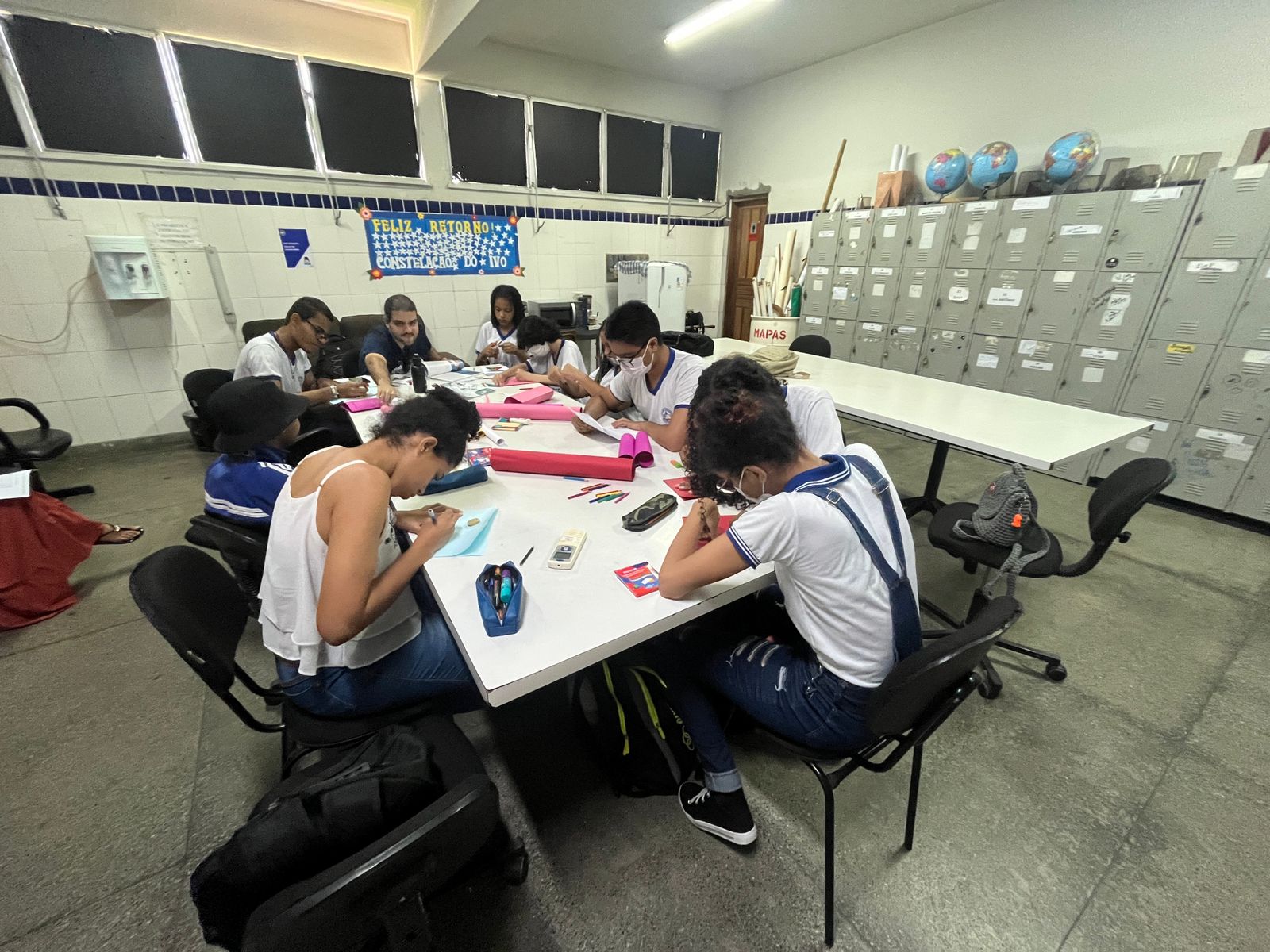 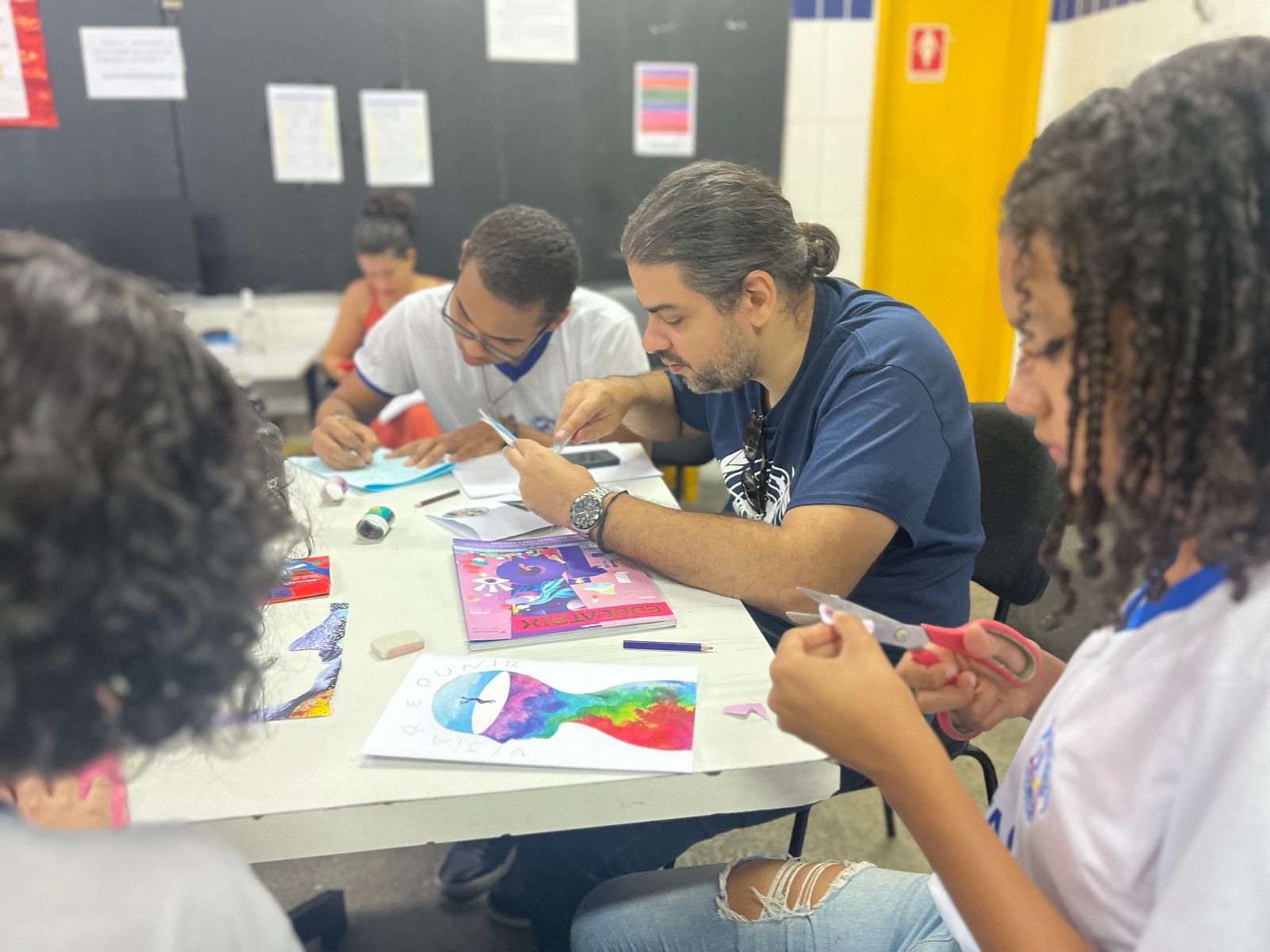 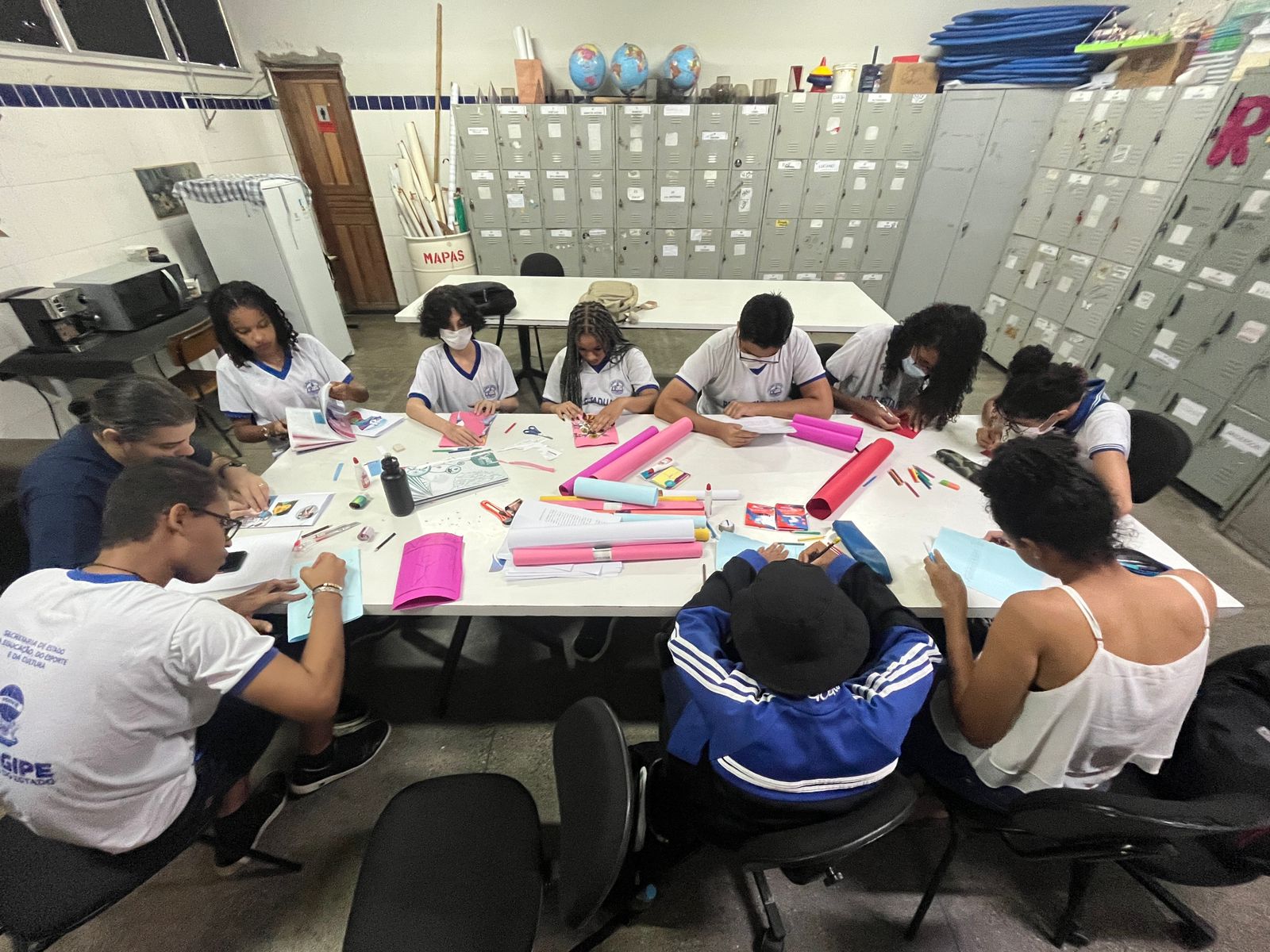 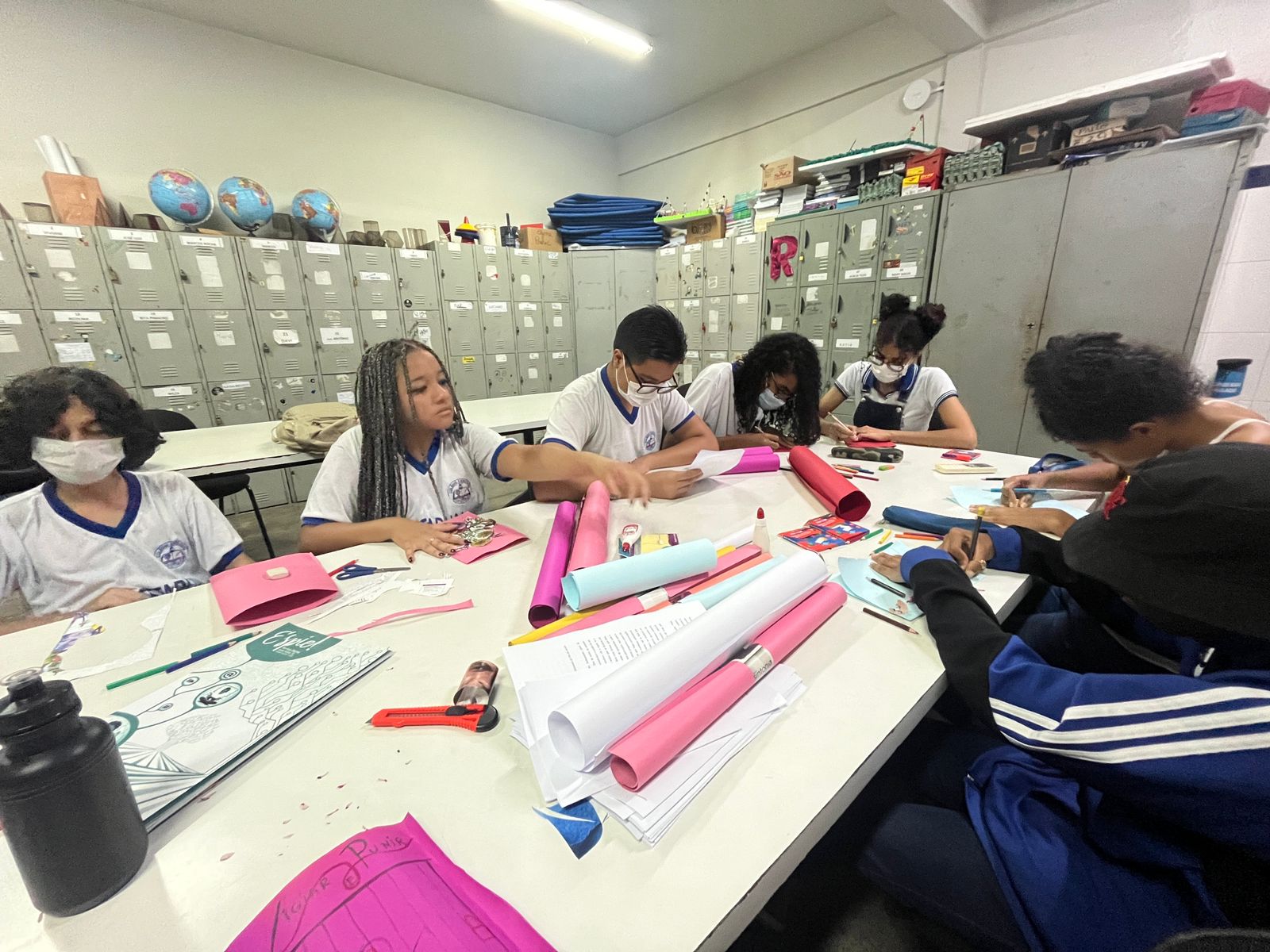 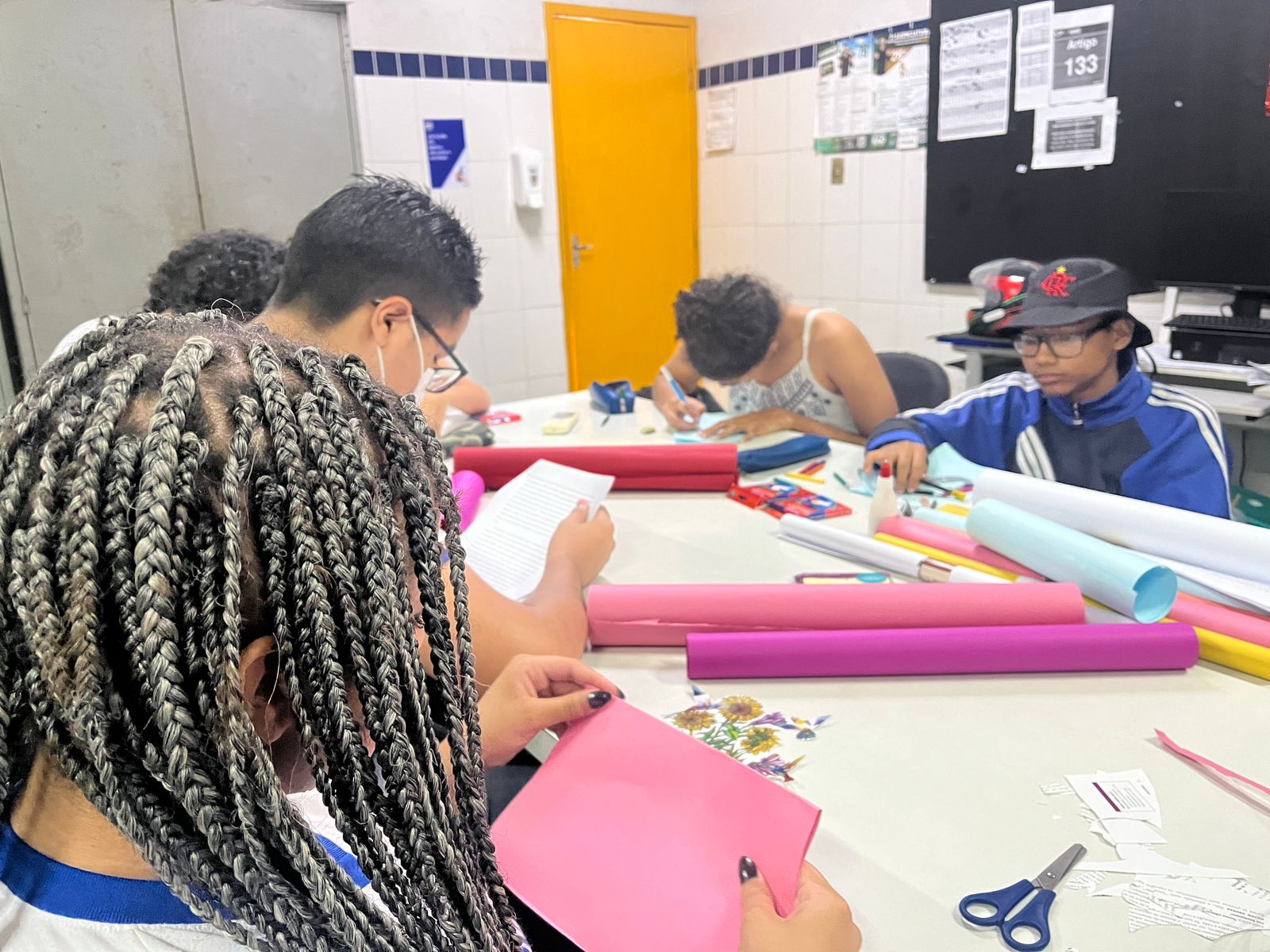 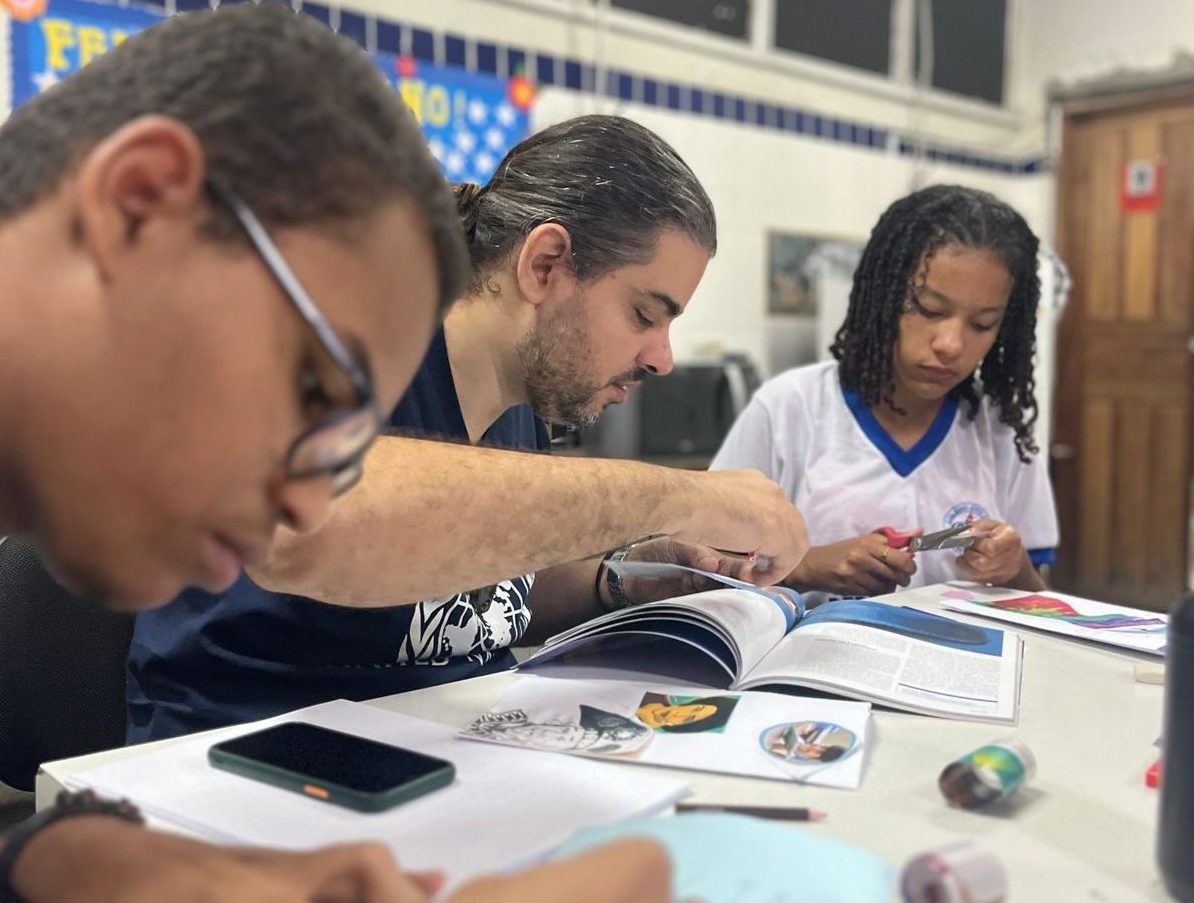 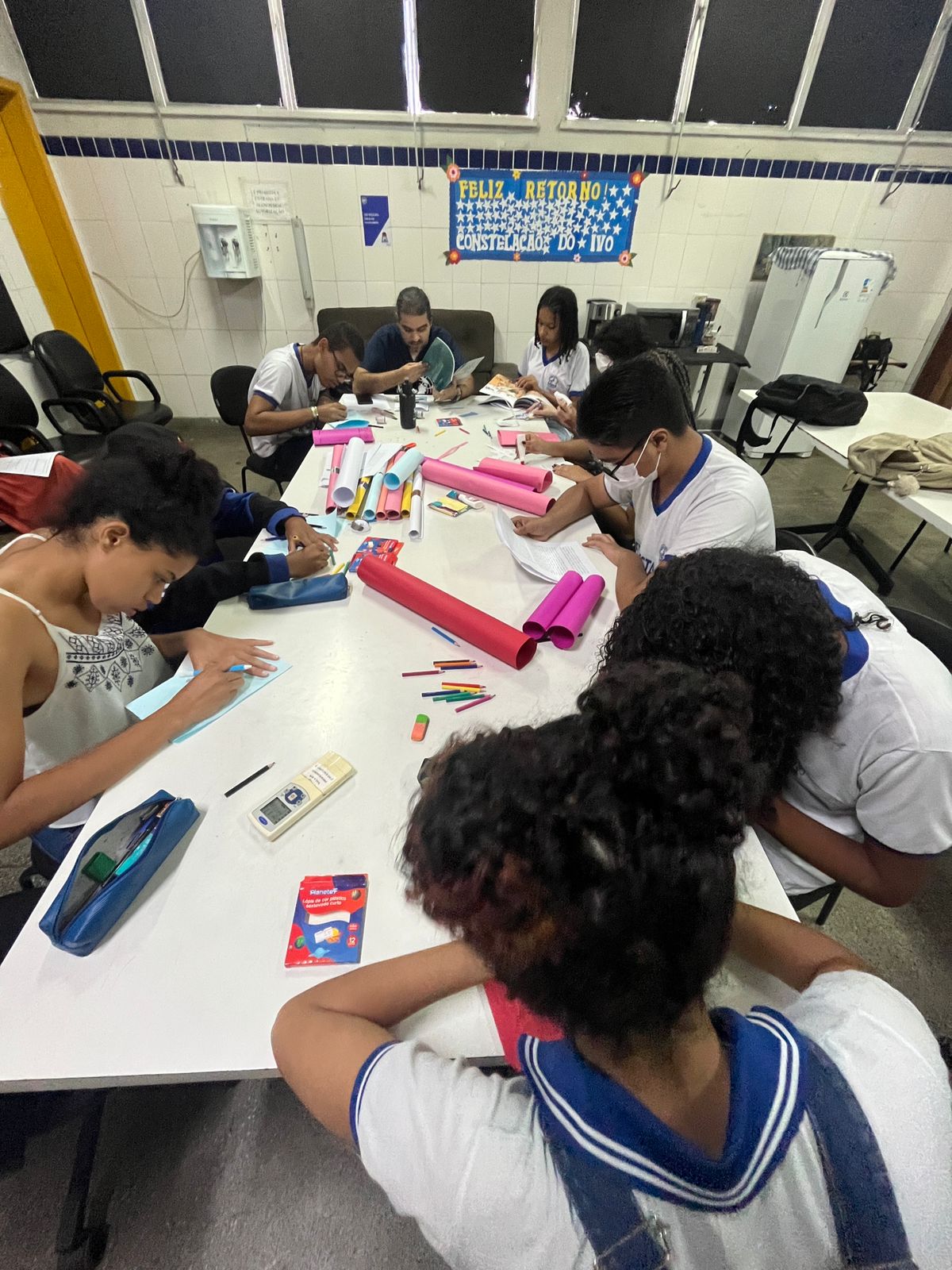 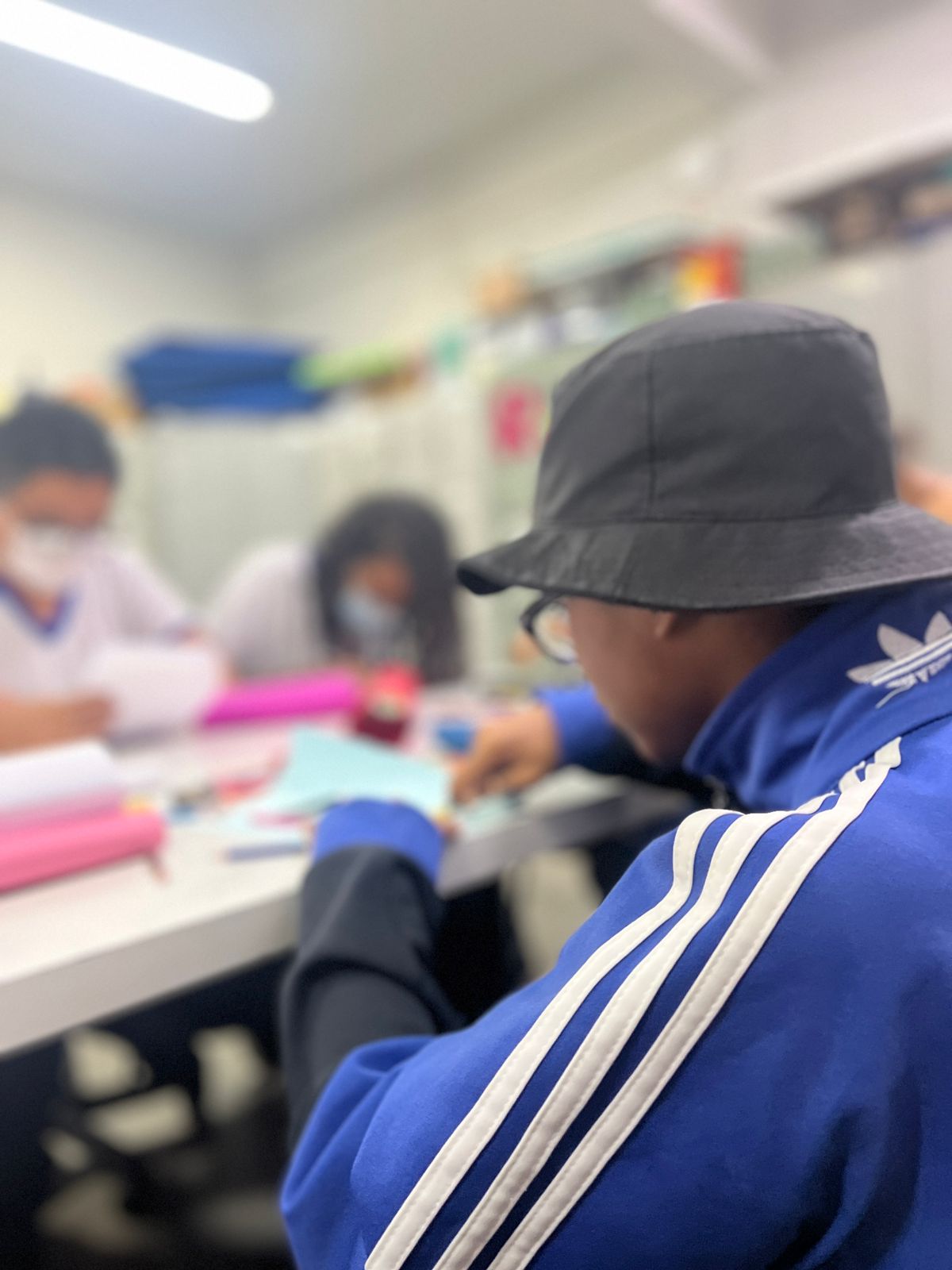 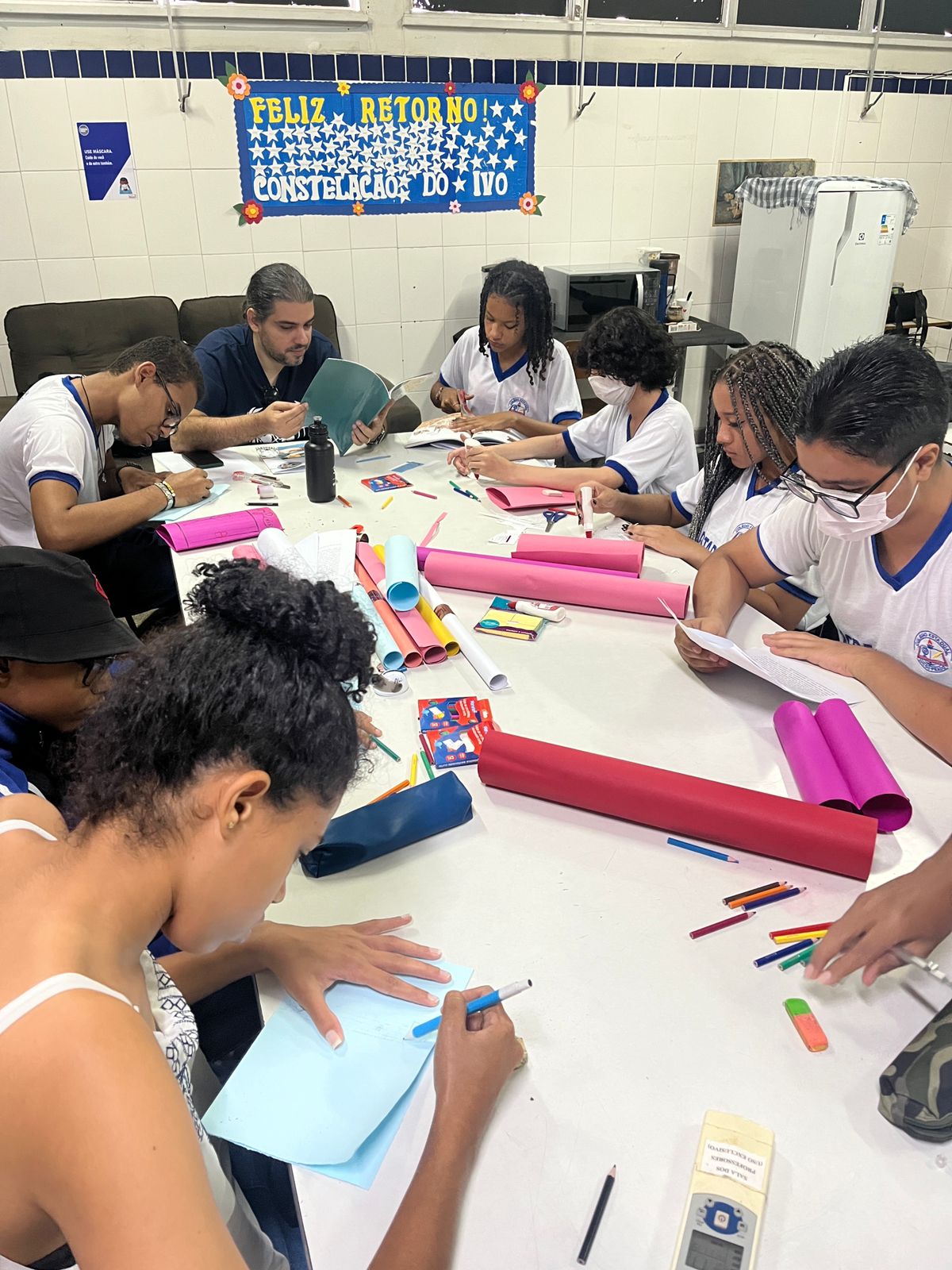 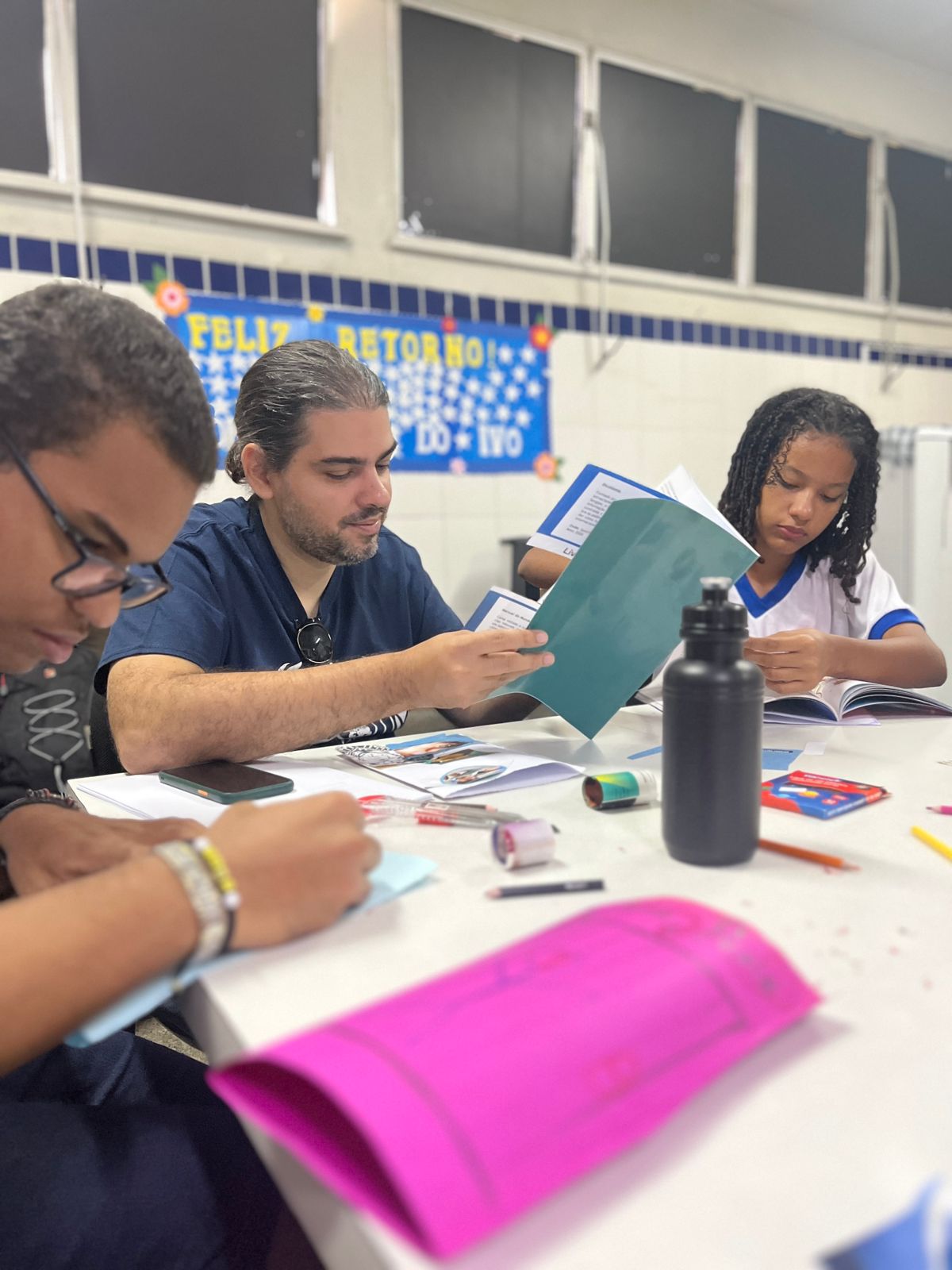 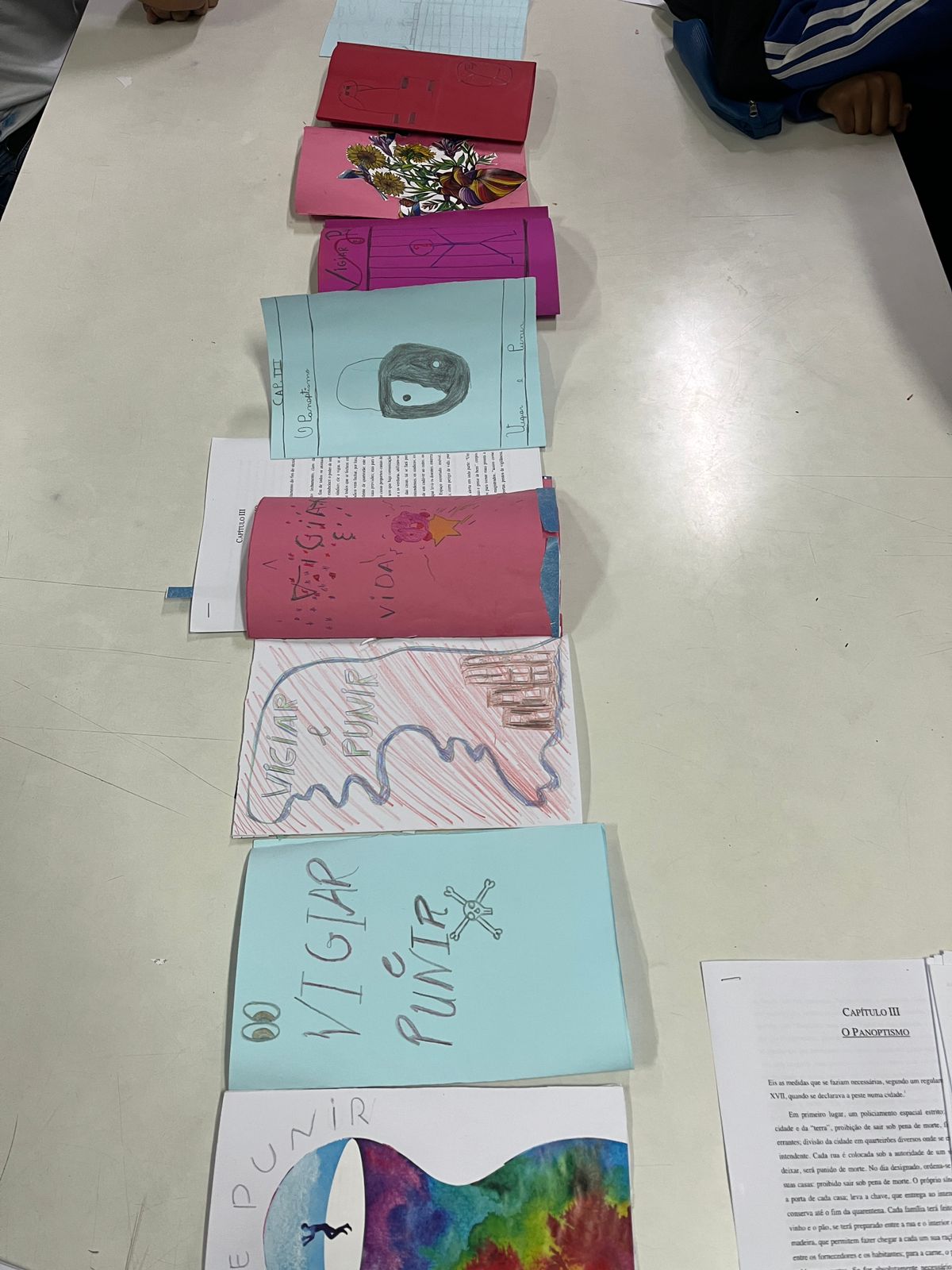 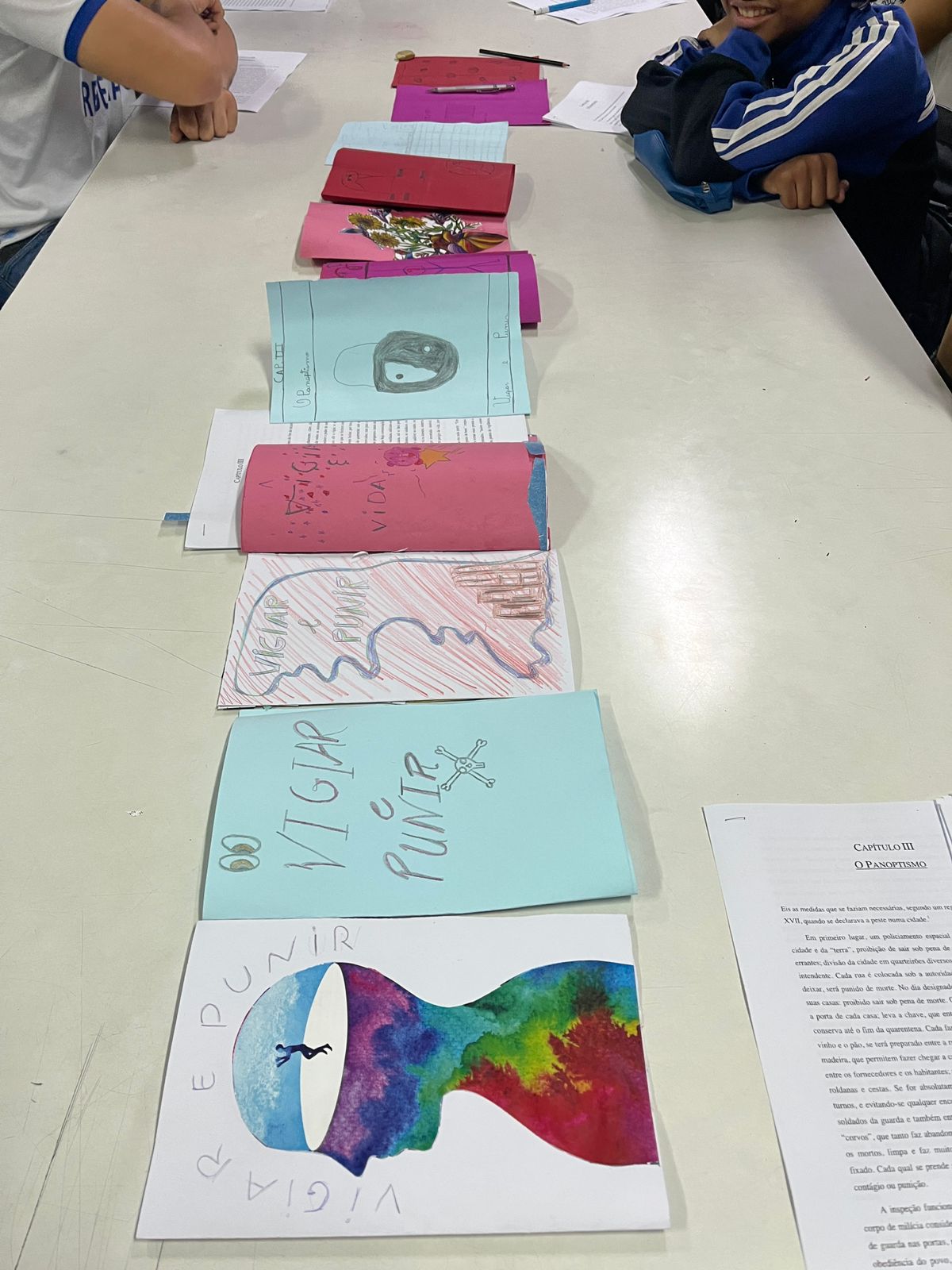 Matheus Batalha, our Brazilian agent, participated in the 2022 Planning week in Ivo Prado State school to encourage the teachers to use the Pre-Texts tools in their regular classes. He also facilitated a mini-Pre-Texts workshop using a Carlos Drummond de Andrade text. This meeting is part of our project that aims to mitigate violence in the school context in Aracaju’s schools

The project’s main goal is to bring the Pre-Texts methodology to Brazil, especially for public schools in Sergipe.

In Brazil, the challenges for the physical and psychological safety of students and teachers are many, and mitigation proposals are of paramount importance. Thus, Pre-Texts is being implemented as a tool for innovation in public school activities. The main goal of this project is to train 25 teachers from the Sergipe State Public Schools with the Pre-Texts methodology and to evaluate the process and the result of its implementation in the classroom.

This initiative reaches Sergipe within the existing agreement between the Sergipe Academy of Letters (ASL) and FAPITEC, which provided important research resources for the realization of this project. In addition, there is the valuable support of the David Rockefeller Center for Latin American Studies at Harvard University, which financed stipends for all public schools’ teachers participating in the project. In essence, it is a combination of two financing entities, FAPITEC and Rockefeller Center, and two important promoters of knowledge, ASL and Cultural Agents.

The main priority goal of this project is to train 25 teachers from state public schools in Aracaju with the Pre-Texts methodology. The actions in Brazil have been led by Dr. Matheus Batalha in partnership with other university professors, such as Dr. Paulo Autran and Dr. Eder Malta, with the support of Rebeca Brito and the undergraduate students Eloá Barbosa and Thais Alves.

The text used was Panopticism III, a chapter of the book “Discipline & Punish” by Michel Foucault. Amazing activities involving arts are being developed from the text.

In the first session, the participants had their first contact with the Foucault text through the out loud reading, and created a book cover using cardboard, recyclable materials, and artistic supplies.

The second session started with the tangents. This dynamic consists of posting in a shared document, anonymously, the excerpt of a text that is correlated with the text used in the first session. Thus, each participant chooses an excerpt they found interesting and the participant who brought the text explains how the correlation of it with the original text.

The proposed activity in this session was, in pairs, choose a paragraph of “The Panopticism” and performance using a music as a background.

The third session started with the “go on a leaf”. The participants shared excerpts from Foucault’s book that impressed them. It was a wonderful way to dive deeper into to the book. Then, two participants became a facilitator, proposing activities to the group.

The first activity proposed was to choose a paragraph of the text and create a new paragraph using 5 words from it. Then, they created a virtual art, manually or digitally.

The second activity, invited the group to write a paragraph beyond the text, being able to add personal experiences.

The session 4 was divided in two parts. In the first part, two participants proposed activities as facilitators.

The first proposed a group activity, writing a paragraph using 10 words of two stretches of the Panopticism III text in connection with the dictatorship period in Brazil.

The second participant proposed an activity using the texts A menina e o pássaro encantado (The girl and the enchanted bird) by Rubem Alves. He proposed a drawing activity that could express and reflect the participants’ limitations (self-reflection) regarding their imposition on students during the teaching-learning process.

In the second part, the participants shared their intervention programs. In small groups, they presented what they planned to do with Pre-Texts and discussed questions and recommendations from their peers.

In December 2021, Matheus Batalha and the Brazilian team led the last session of Pre-Texts workshop for teachers from two Aracaju’s public schools, Brazil. 24 teachers participated in the meetings at the Ivo do Prado State School and Professor Maria das Graças Azevedo Melo State School, completing the first stage of the project, which intends to establish the mitigation of violence in public schools through the use of Pre-Texts tools. The event received notoriety in the local media.

​In the next stage, teachers will use elements of the Pre-Texts methodology with their students, during classes. We are looking forward to knowing the final result of this project.