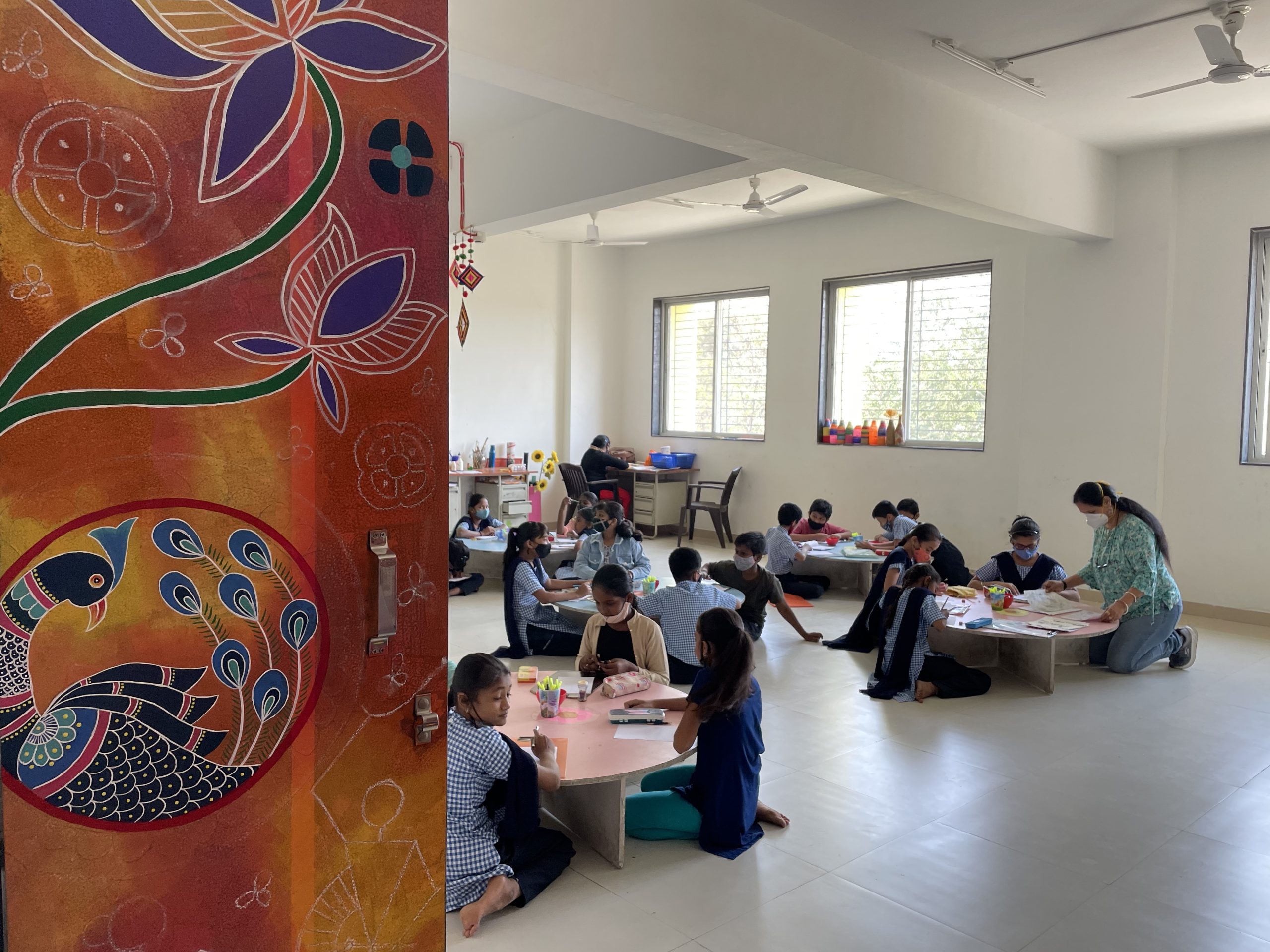 During the week of February 20 to February 26, Doris Sommer represented the Lakshmi Mittal South Asia Institute of Harvard University in Pune, Maharashtra, India, to initiate a research project on Pre-Texts with Prof. Yugank Goyal of at FLAME University. The objective is to determine the effectiveness of Pre-Texts, a pedagogy based on interpretation through the arts. The timing is auspicious for this study.

Recently, the Indian government instituted a mandate to integrate arts into the curricula of all schools. This an admirable step forward in education can take advantage of the rich traditions of art that generate pride of place for India, by region and nationally. The challenge for teachers and principals is how to implement the arts-integration directive. Where schools have begun to develop the practice, art is engaged as a final step of lessons, to illustrate a lesson learned.

Professors Sommer and Goyal visited two municipal schools run by the government mentored by LFE (a nonprofit), one run by Akanksha (another nonprofit), three private schools, namely, Millenium School, Kalmadi School and TAS, all located in Pune. In addition, Sommer and Goyal addressed a seminar consisting of school principals and coordinators from ten other schools in the region. There were several other meetings with relevant stakeholders that also took place. 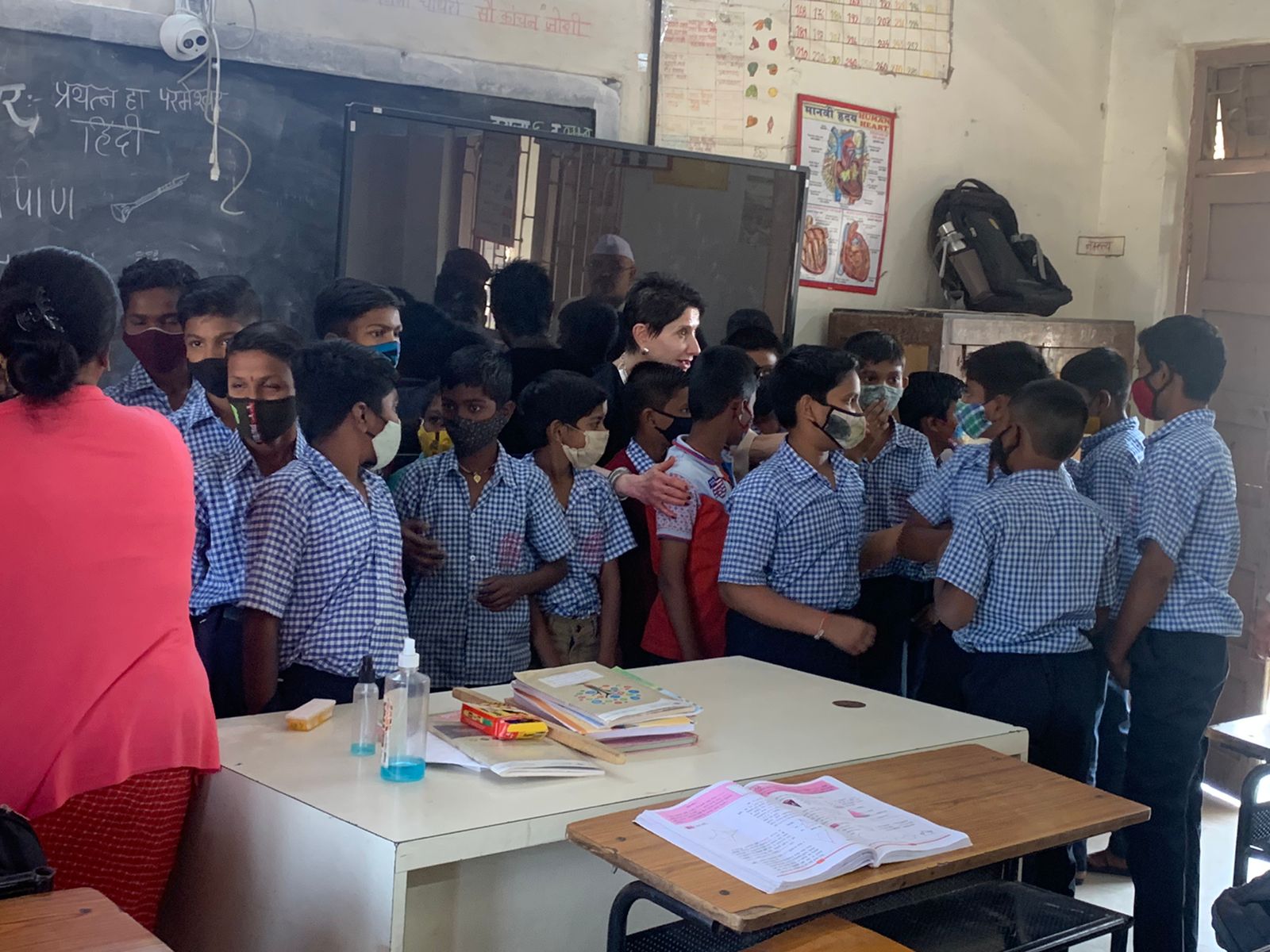 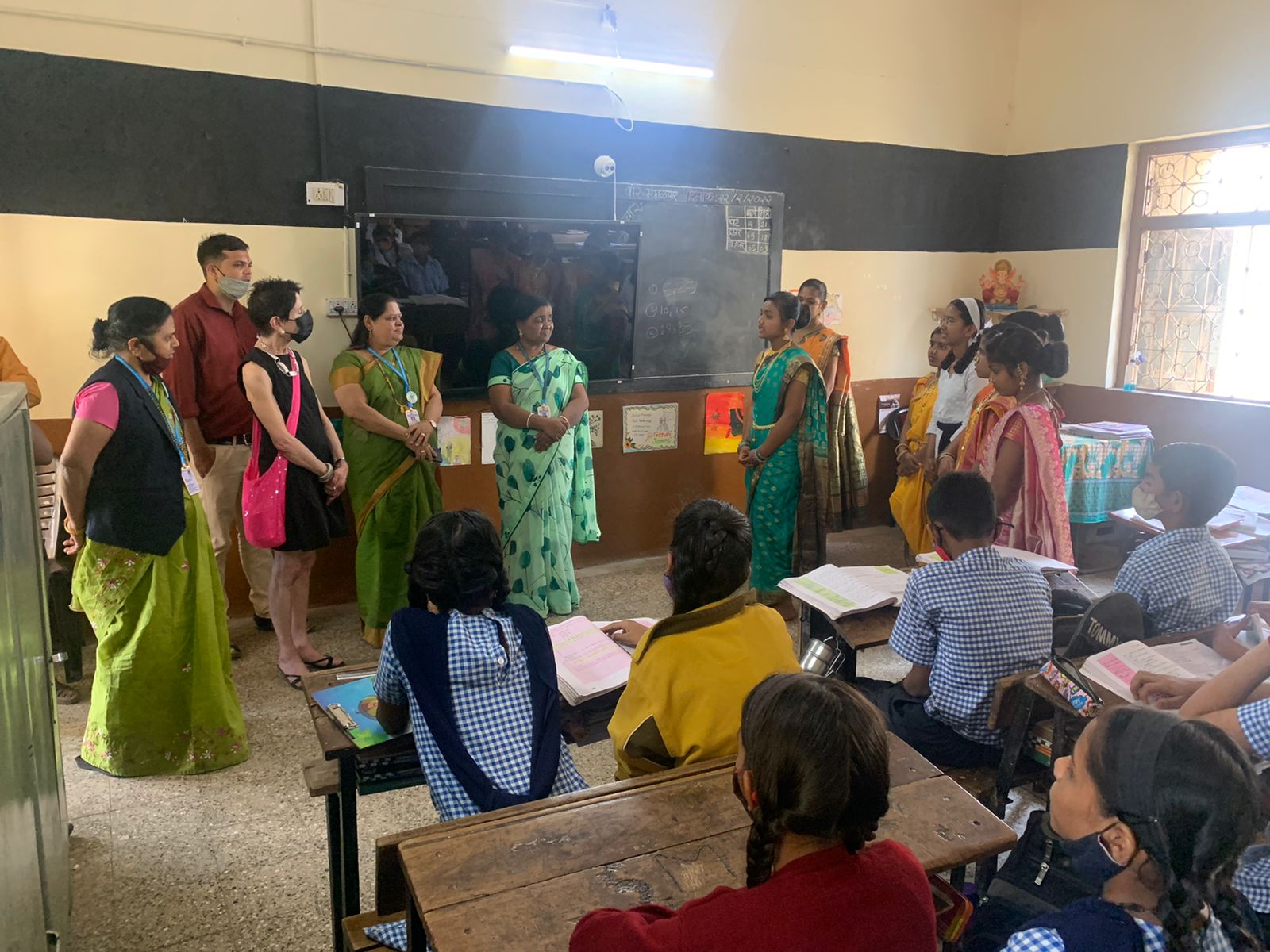 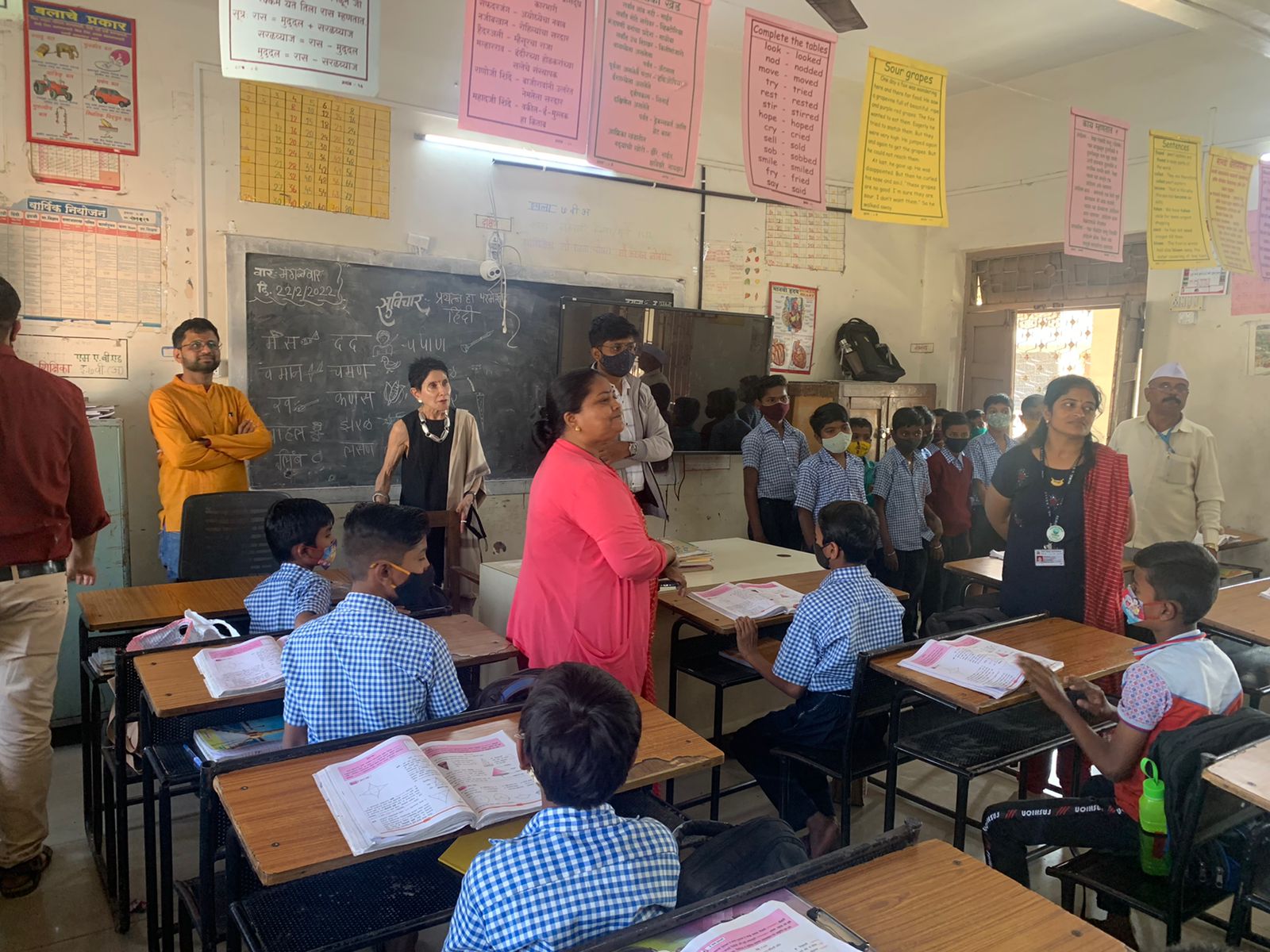 With good intentions, teachers follow Bloom’s taxonomy which understands teaching and learning in a pyramidal design, starting from a base of technical information (vocabulary grammar, formulae), ascends to an understanding of the material, proceeds to interpret the material and concludes with a creative expression of what has been learned. It is perhaps easy to see why this process of scaling up often fails: Students become bored or disaffected, even fearful and resentful, when the first stage is memorization of new words, concepts, and formulae. They do not scale up to understanding and interpretation and therefore cannot realize an art project based on the lesson. This is a mistake in pedagogical practice. The more conceptual error in this conventional use of Bloom is that here art represents an expression of what one already knows, rather than an exploration of new material. The standard practice forfeits art’s power to engage the reading material and become a vehicle for learning.

With Pre-Texts, none of the steps is lost. But the pyramid begins from the top, with a challenge to make art from a text. The difference is dramatic. Students who are addressed as artists rather than struggling learners convert difficulty into challenges rather than obstacles. See, for example, Kalmadi’s 8th grade class tackling “The Beggar” by Chekhov. Explorations of the texts to be mastered, through dance, drawing, theater, creative writing, etc. develop personal associations and idiosyncrasies. And the differences of interpretation are contributions by the variety of classmates. Difference becomes a value rather than an error. 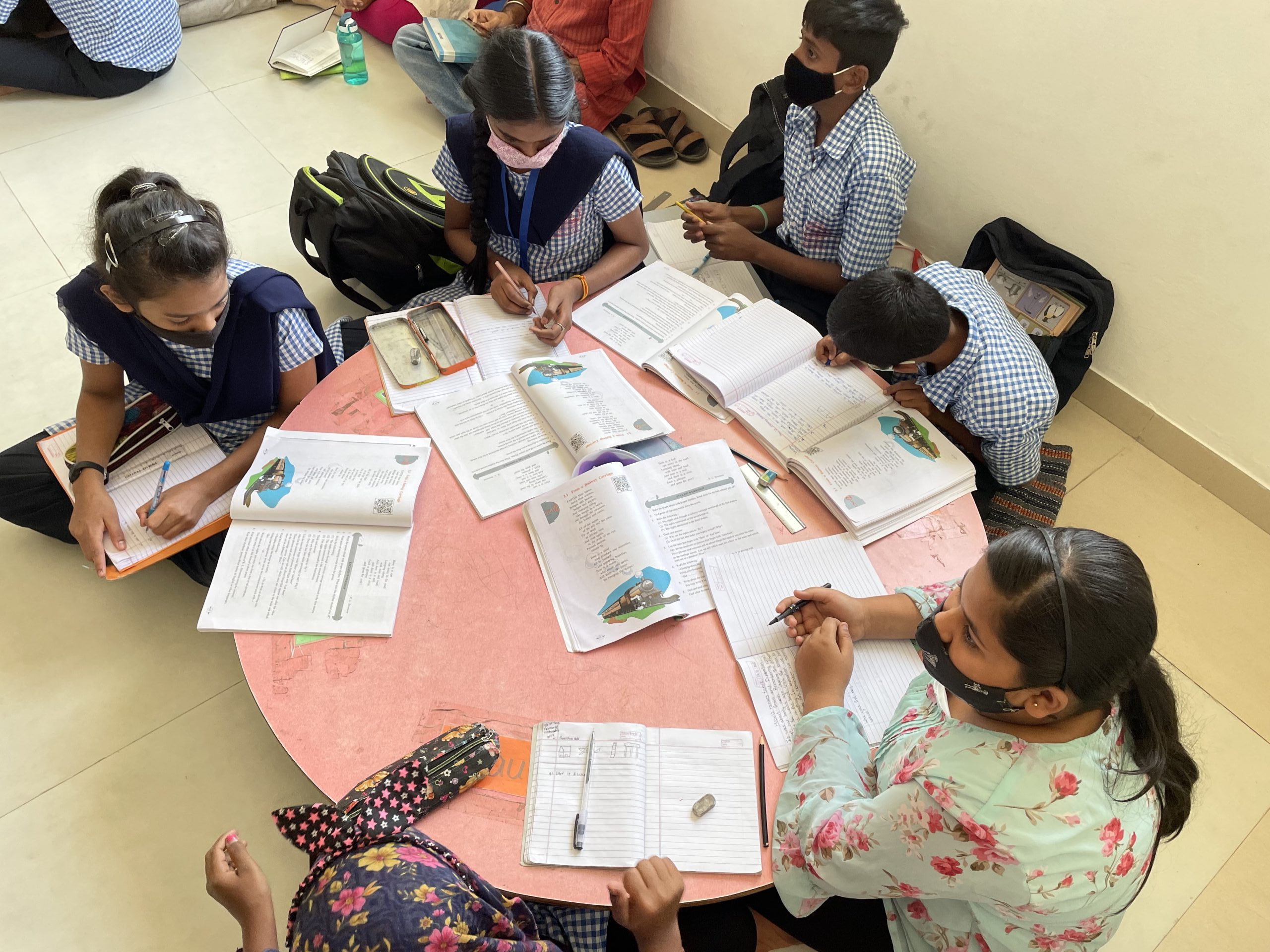 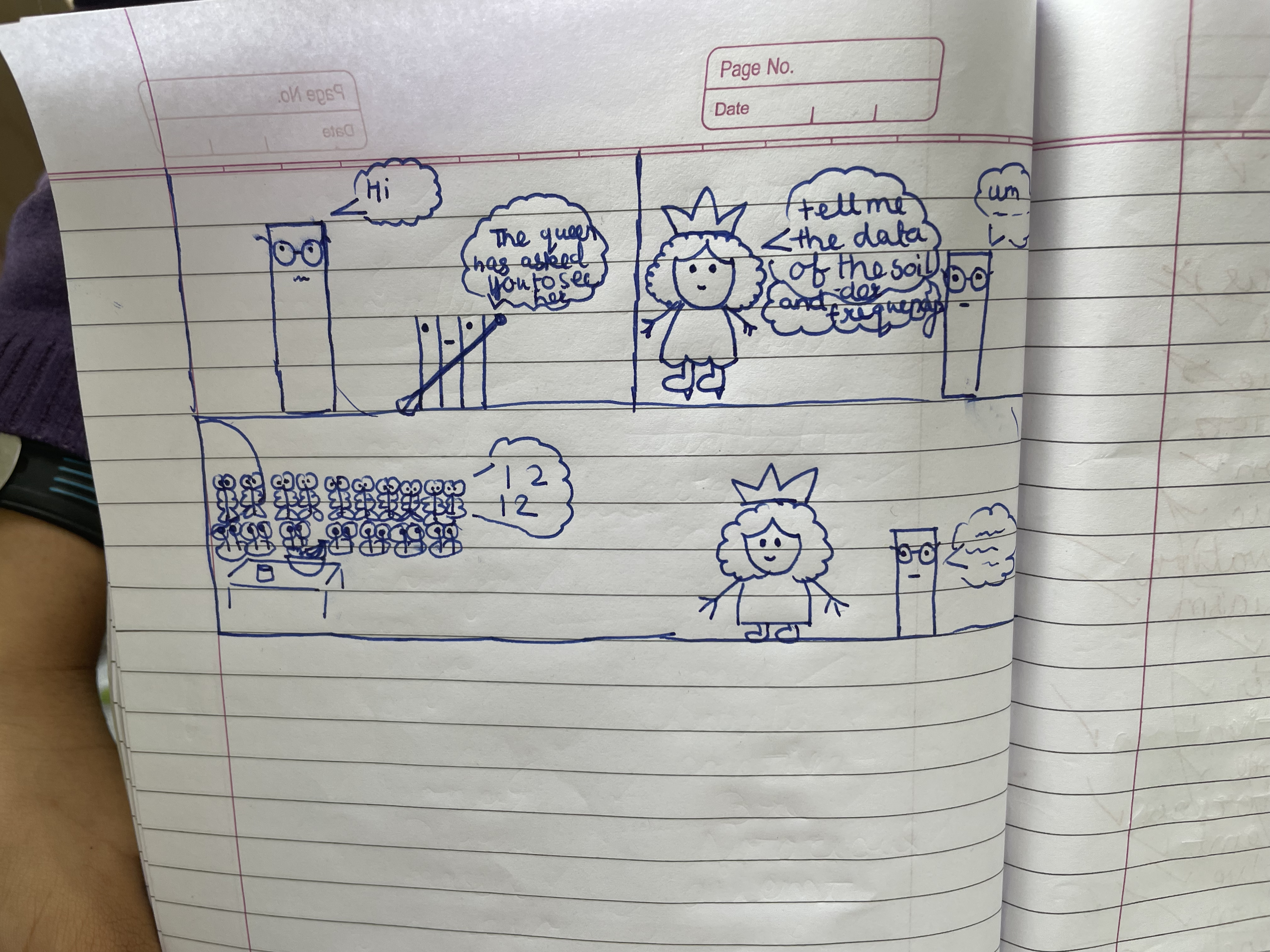 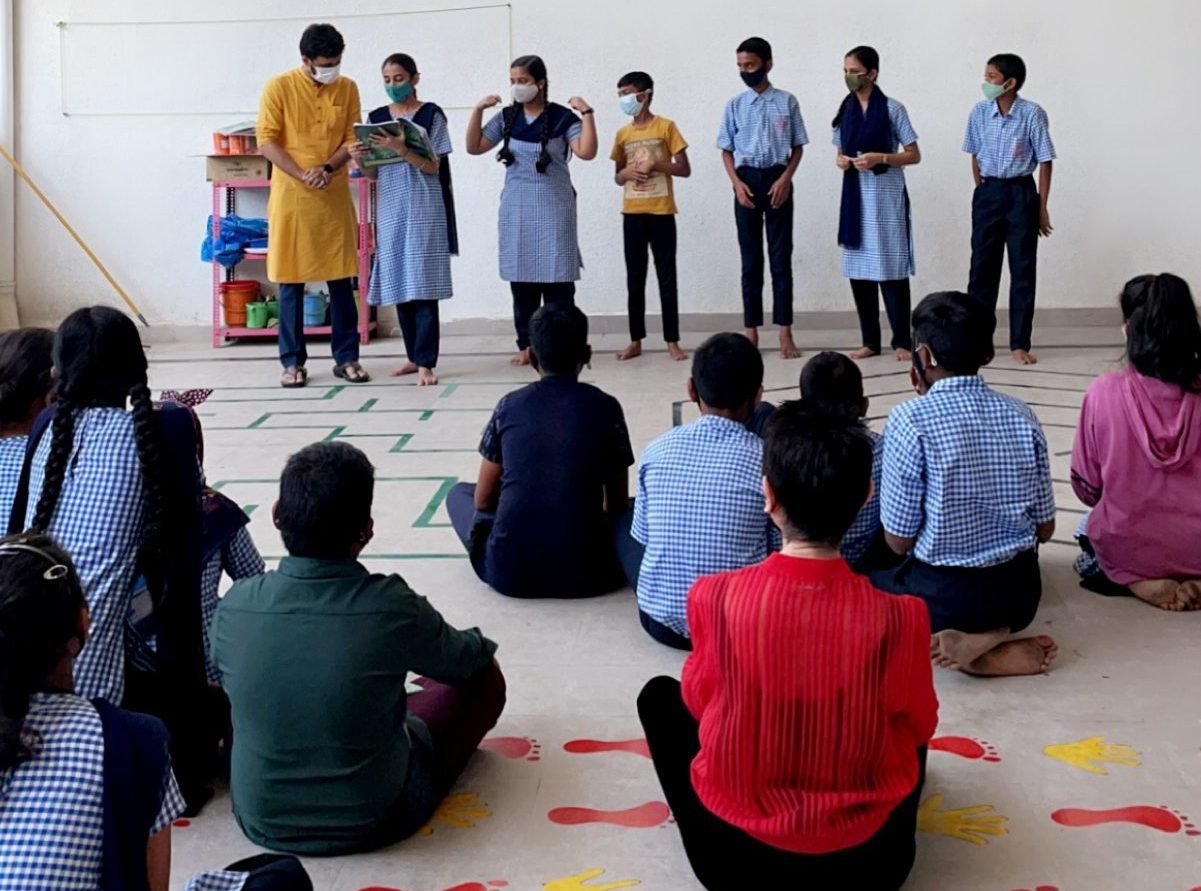 ​The teachers, principals, and students who participated in demonstrations of Pre-Texts experienced the advantages of this approach very clearly. Each school was eager to be chosen as the site for our pilot intervention and even inquired about the cost of training should they be chosen. Our visits adjusted to different styles and conditions of the schools. Almost all gave us a formal introduction to the classroom we visited, with a teacher instructing rows of seated students to stand, to greet in one voice and to sit down. The conventional power of authority was predictable and palpable. 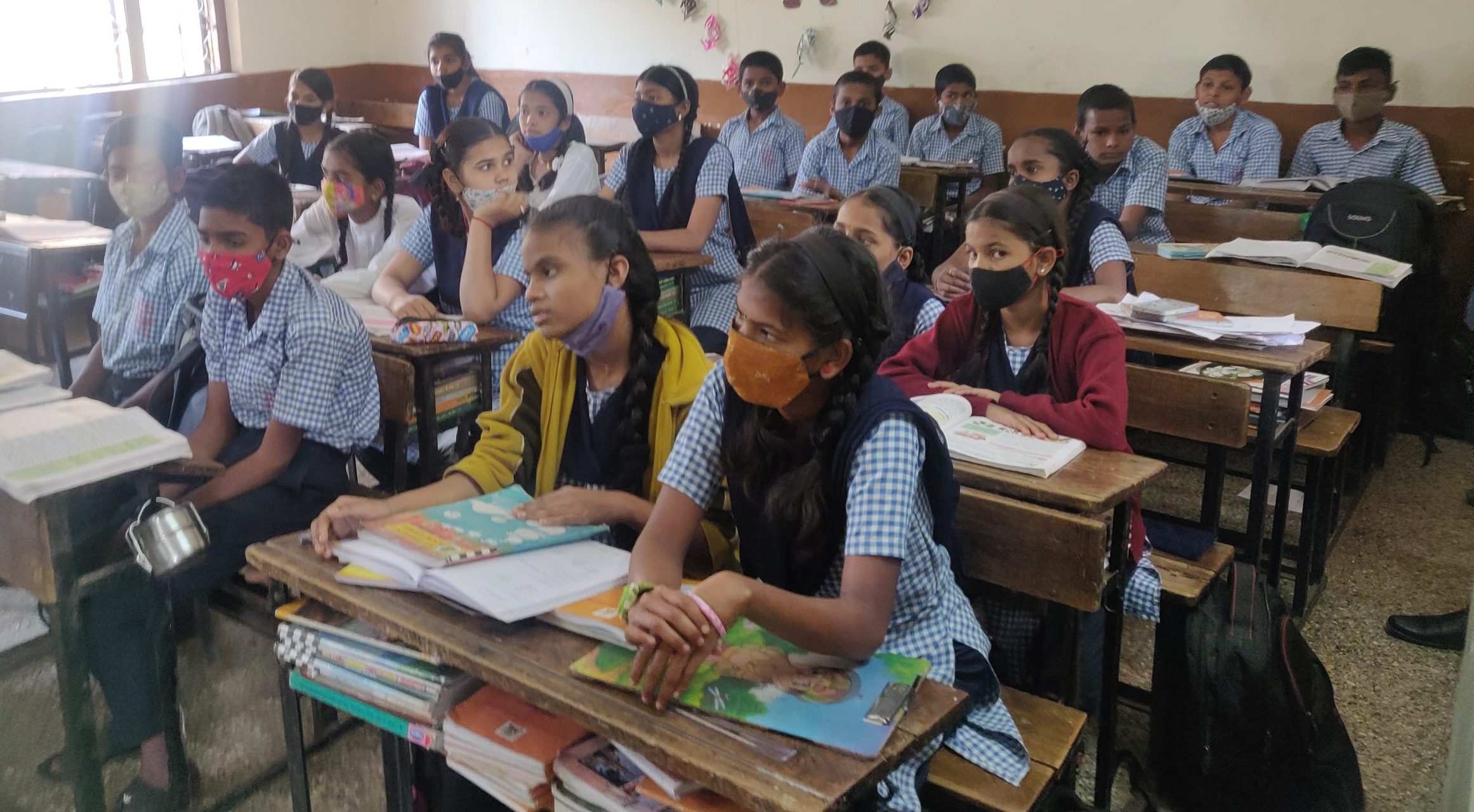 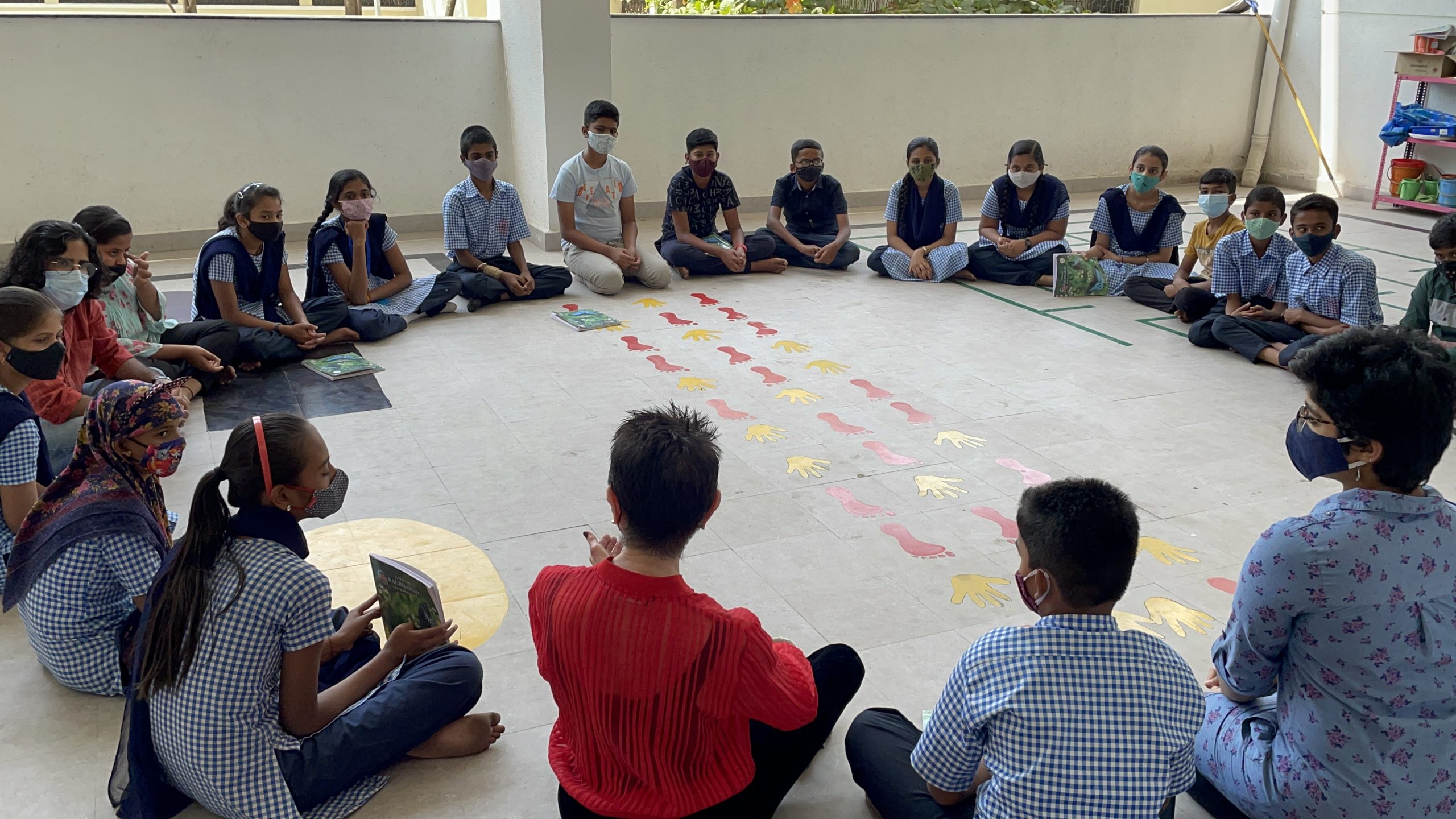 During our conversations with teachers, Doris observed that the choreography of a classroom is at least as important as the content of a lesson.  Rows of students where the “bright” ones sit in the first row without seeing other classmates, and the others see the backs of heads of their peers, while all look at one authority, is an arrangement that breeds worse outcomes than mere authoritarianism. The corollaries are indifference to the lesson and corruption. Most teachers know that the students in the back row are doing something different from following the lesson.  Disaffected and often ignored, they do what they want and make their own rules. The first thing Pre-Texts does is change rows into circles, or ovals. The criterion is for all to be visible and vulnerable to all.  Where this is spatially impossible, we make ovals or U-shaped formations during the protocol, when we share initial questions to the text and final reflections on a completed activity.

In one 8th grade class in a municipal school, beautifully and traditionally dressed girls who had greeted us royally with a local dance and song were our inspiration for proposing there that we dance a paragraph from a text that they had not yet read in English class. Immediately, everyone located their books – without prompting – and asked each other and the teacher to clarify words and grammar. Five companies of dancers emerged, with prompting to achieve gender equity. To our surprise and delight, companies that did not identify as experts in dance performed more interesting interpretations than did the troupe that had greeted us.

Later that Tuesday, in an all-boys municipal school, a 6th grade math class was studying geometry. We invited the teacher to find a challenging lesson that the students had not yet read. The choice was a page on cones and pyramids. The large class of 40 boys moved to the hallway on the teacher’s recommendation and divided into groups of 6-7 students. They performed a cone in each group by standing in a circle and raising their arms at an angle to form inclined lines into a cone. Then each troupe presented their work.  Here the principal was quick to correct a flat-topped formation until he understood that the students of the other troupes were “advisors” whose role it was to correct and perfect the formations of each group. They were admirably precise and gentle with one another. Relieved from competing to be the best or the first to answer questions, students collaborated and supported one another. This observation became a leitmotiv during the entire week, repeating in each of the six schools we visited. 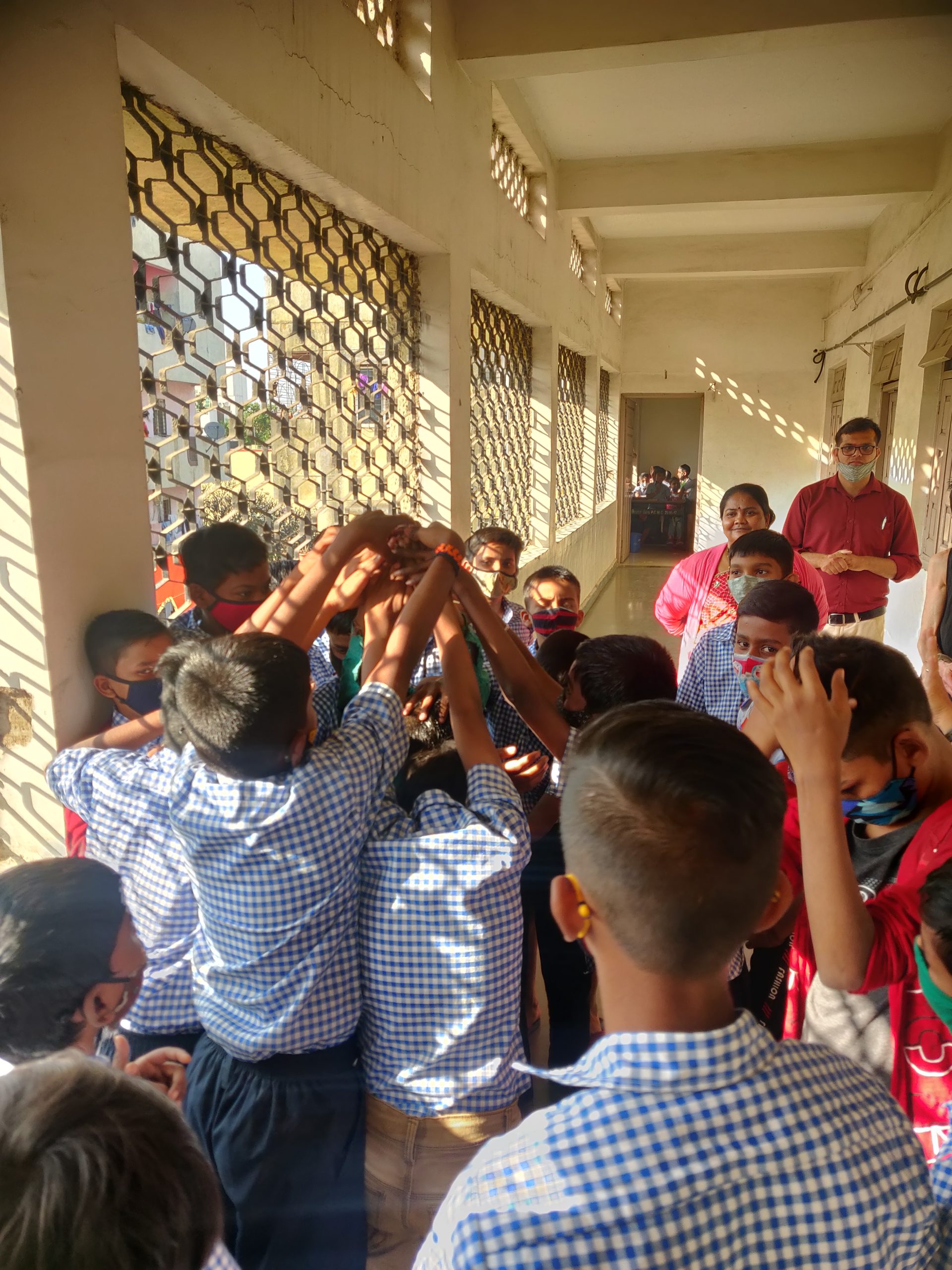 Then Doris asked the boys, almost teasing, if they wanted to tackle the pyramid, or if one shape was enough. Yes, yes, let’s do the pyramid many answered.  Then they got busy consulting the book and each other. Concerned that this was too difficult, the mentor from Learning For Equity (LFE) thought it was enough to do the cylinder on the same page. But, since the boys were already engrossed in their work, Doris decided to let them continue. The mentor was impressed with their determination and with the results. Afterwards, in the reflection that follows each Pre-Texts activity, when we ask, “What did we do?”, the 40 boys arranged themselves in a U-shape inside the classroom, taking advantage of two aisles and the front, since there was almost no room for circulation. The comments were generous with one another and happy to have achieved a difficult task with pleasure and collaboration. Also, as in all cases, they commented on how good it felt to see one another. 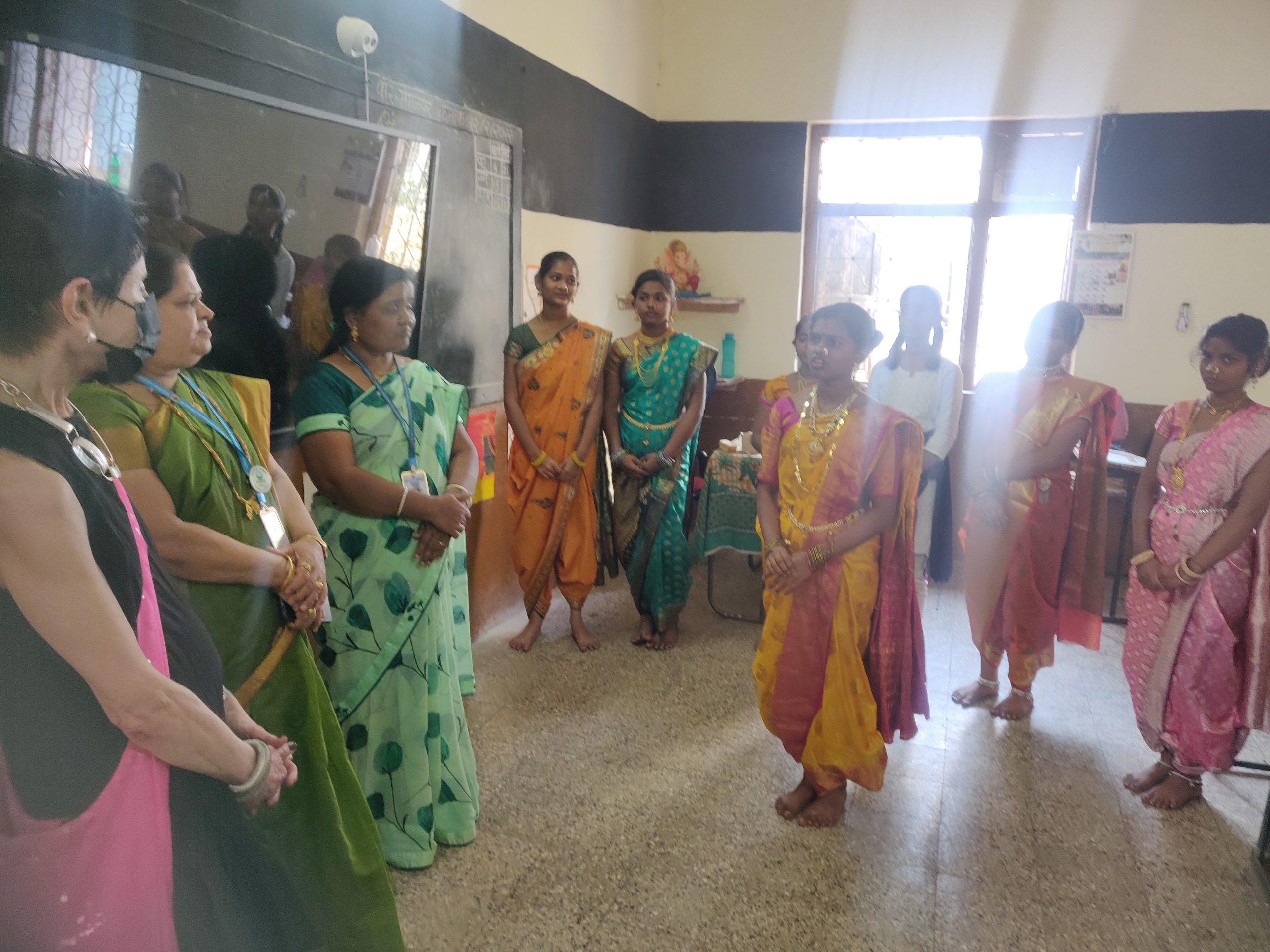 The week’s meetings included an exploratory conversation with LFE, an NGO that supports government schools by, inter alia, training and accompanying the mentors appointed by the national government to train and to frequent government schools to monitor teachers, on the ground. Doris and Yugank made a brief presentation of Pre-Texts, including the evidence gathered by the Shamiri Institute in Nairobi on the mental health intervention in that city’s biggest slum, In Kibera, half the adolescents are clinically depressed, with no money for therapy, no available therapists, and stigma against acknowledging mental disorder. Pre-Texts does therapeutic work there, with no change of protocol. It is an effective and low-cost, de-stigmatizing, intervention, because the entire cohort of adolescents participates, without tagging one or the other as ill. So far, the results have been very positive, stunning in fact, after one -month of after-school programs by young facilitators who have no or little experience teaching but who follow the protocol shared by the Shamiri director, Tom Osborn. 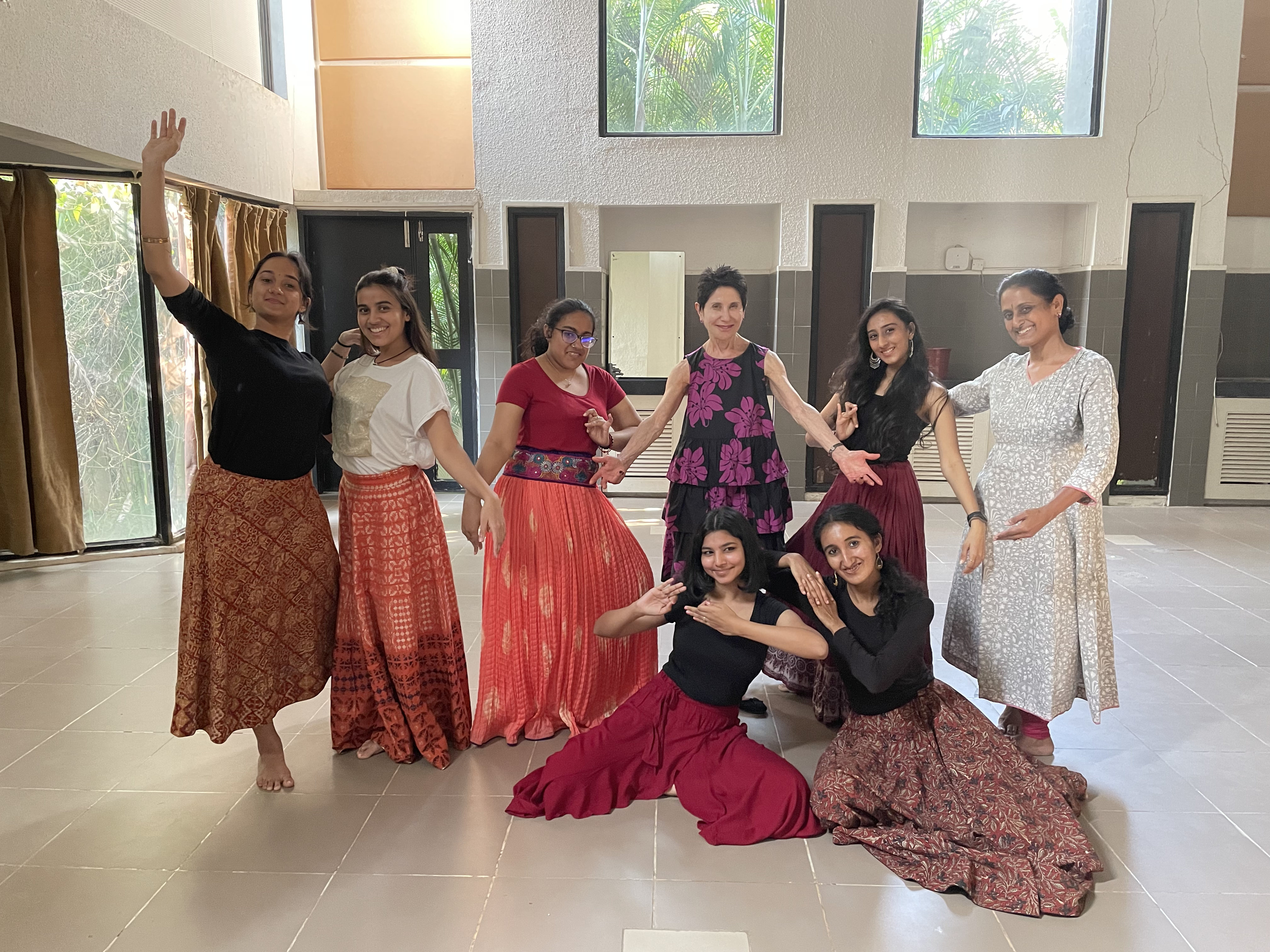 Among the issues we discussed at LFE is the popularity of “socio-emotional learning,” a strong tendency internationally.  In Kenya, Shamiri has recognized the importance of coordinating mental health interventions with improved attitudes toward cognitive learning, because one of the major stressors for students is the pressure to do well in school. Therefore, it does not serve the needs of depressed adolescents to distinguish between the pleasures of artmaking versus the rigors of learnings, to favor one over the other and to cast schoolwork as a burden when it is a challenge that students need to address to reduce psychological stress. This conflict between head and heart has been a damaging if unintended consequence of SEL. With Pre-Texts, the whole person is engaged. “Use any text as raw material to make art and reflect on what we did” is a prompt that engages cognitive, socio-emotional, creative and civic dimensions in a dynamic system. After dancing a paragraph, or performing a pyramid, or acting out a poem, making story boards from a chapter on data management, a musical score (all activities we did with groups of participants – including principals of private schools) we asked: Is this a cognitive exercise? Is it expressive of emotions? Does it engage groups and sociability? Was it fun? To all the questions there was enthusiastic assent, and acknowledgement that the same activity achieves all the goals of education. 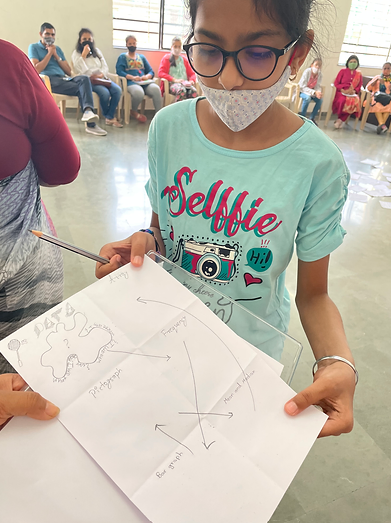 The next steps in Pune will be to identify a few schools as the site for our pilot (which will include both the treatment and control). Then we will train by zoom teachers of every subject from two different levels, grades 1-2 and grades 7-8. It will be important to include all teachers at these levels as well as the principal. The group of 20-25 future facilitators will include the FLAME University team and members of LFE.

Become a Research Associate in India