The weeklong Pre-Texts course responded to the need for a new educational paradigm at the global scale, one that can take on the challenges generated by a growing cultural heterogeneity and the general lack of linguistic comprehension. Pre-Texts offered a methodology to advance integral education for heterogeneous populations of limited resources that is easy to implement. A series of talks with the most relevant figures within the Spaniard educational panorama were also held during this week. 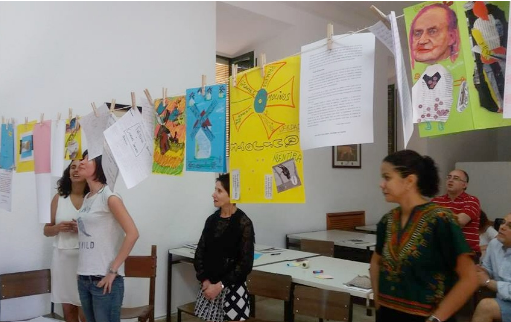 The Pre-Texts: Education, Creativity, and Citizenship course began with participants around the materials table creating their own books while one of the facilitators read a chapter of Don Quijote out loud. The first activity consisted of creating a soundtrack for the reading utilizing four songs we had played. Afterwards, participants were invited to create a circle and to answer the question, “What did we do?” This dynamic created a democratic atmosphere that lasted until our last day together. Between the course sessions, conferences were given by some of the most important figures within Spanish education. Every day, participants were asked to bring “branches” for the clothesline, where they hung their own texts and took turns reading the texts of others. During the course, participants proposed a number of activities such as: creating a comic, taboo game, reading in different moods, creating a letter from an absent character (e.g. Dulcinea), chained theater, mimicry, and mindfulness.