Pedro Reyes: Amendment to the Amendment 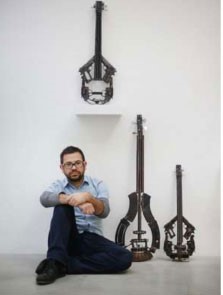 Artist Pedro Reyes led a series of workshops with the motivation of addressing gun violence. The project was based on the second amendment and reflected on gun violence in Mexico and the US and the relationship between the two. Pre-Texts was used as an activity to work on rewriting the 2nd amendment, and using the “intertext” poetry tool. The workshop was first done in Tampa, Florida and has also been held in Phoenix, San Francisco and other cities. Read more here.

More information on Amendment to the Amendment:

“Legislative Theater” is a style of performance pioneered in Latin America in the 1960s to influence social change. Pedro Reyes is reviving this tradition to demonstrate how legislation on one side of a national border can have dire consequences for those living on the other side. The example that has inspired several of Reyes’ major projects involves the relationship between drug-related violence in his native Mexico, and lenient gun laws in the U.S.

“The Amendment to the Amendment,” for example, is a sculptural/performance artwork that refers to the second amendment to the U.S. Constitution that guarantees the right to bear arms. The numerous murder victims in the border cities of Mexico provide grim evidence that this U.S. Amendment also impacts Mexican citizens. Reyes’ appeal to his fellow-Mexicans to relinquish their guns and save lives comes in the form of an enticement, not a threat. He is dismantling a huge stash of guns (6,700!) that a government agency in Mexico confiscated from criminal gangs. Then he is reassembling them into guitars, violins, flutes, and percussion instruments that are played in concerts. This labor-intensive process carries an uplifting social message. Each instrument testifies to the possibility of transforming weapons of conflict into instruments for creating social harmony.

The gravity of Reyes’ topic is revealed in the enormous quantity of guns at his disposal.This politically charged medium is a poignant symbol for the need to create a ‘world symphony’. When the instruments are played, they materialize this promise by performing consonant melodies that evoke peace. Reyes’ work embodies the promise of global harmony.

The musicians who take up these instruments and all the members of their audience join his protest against the 2nd Amendment of the United State . As in ‘Legislative Theatre’, Reyes is capitalizing on the double meaning of the verb ‘to act’. On the one hand it means to perform, as in concerts or theater. On the other hand, it means to take action, as in political protests.

Reyes is unequivocal about using his art form to promote a radical form of democracy. Like Augusto Boalo, an originator of this theatrical political form in Brazil, he applies his artistry to politics. Boal actually served as a city councillor in Rio de Janeiro from 1993 to 1997.In the theater productions he produced, members of the audience take the stage and even decide the outcome of the narrative. Boal used this strategy to motivate the local populace to take action in their own defense against legislation that impinged on their well-being. Both Boal and Reyes invest their art with the political intention of involving everyone, but especially those who are oppressed, in the democratic process.