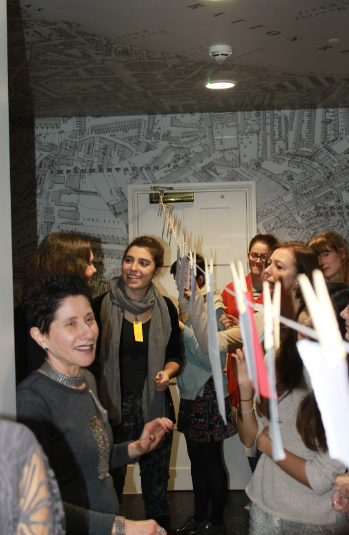 In November 2016, Pre-Texts workshops were held at King’s College London and the University of Westminster.

Language Acts and Worldmaking is a flagship project funded by the AHRC Open World Research Initiative, which aims to regenerate and transform modern language research and learning by foregrounding language’s power to shape how we live and make our worlds. To mark the launch of Language Acts and Worldmaking, Professor Doris Sommer discussed her groundbreaking work with the Cultural Agents Initiative, promoting the divergent thinking of arts and humanities in the service of solutions to real life problems.

On November 18th and 19th, Prof. Doris Sommer presented her work in the areas of civil agency and public humanities at King’s College and the University of Westminster in London as part of the Language Acts and Worldmaking project, promoted by the Open World Research Initiative (OWRI) of the British Arts & Humanities Research Council (AHRC).

After offering a talk on Cultural Agents, Prof. Sommer facilitated a workshop session on Pre-Texts, which opened opportunities for new collaborations by showing how the Pre-Texts methodology complements the Language Acts and Worldmaking Project’s (and OWRI’s) goals in language learning. Led by Professor Catherine Boyle (Professor of Latin American Cultural Studies at King’s College) this project aims to regenerate and transform modern language research and learning by foregrounding language’s power to shape how we live and make our worlds.