In August 2017, Professor Doris Sommer visited Argentina to facilitate a five-day long Pre-Texts workshop. The workshop was organized by the Instituto de Vivienda de la Ciudad, Arte en Barrios from the Ministry of Culture of Buenos Aires, with the support of the Psychology Faculty of Buenos Aires University and MAMBA (Buenos Aires Modern Museum of Art). 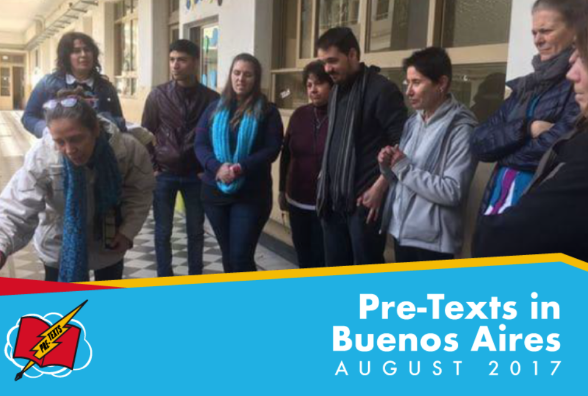 The following is a translated reflection from Gonzalo Aguilar:

Doris Sommer arrived in Buenos Aires Friday morning. I met her at the airport and that same day we began our pilgrimage through the city. Doris, who I had met at Harvard, was going to introduce the Pre-Texts methodology to train cultural agents in the vulnerable neighborhoods–or slums, “villas,” as they are known here. First, we went to la Casa de Cultura de Villa 21-24, where we met with its director, Gustavo Ameri. There, as with everywhere we visited afterwards, Doris’s enthusiasm for learning, games, and creativity was contagious. No meeting was just a mere exchange of opinions. On the contrary, there was a feeling of participating in a mutual project: one of social change through culture and reading.

Doris’s workshop left many lessons. From my perspective, the most important element is that Pre-Texts demonstrated the link between knowledge and reading practices. It was not about sharing critique and literary theory, but rather about experimenting with texts to continue developing hypotheses, not according to abstract and old principles but rather according to experiences with reading. Secondly, in the questions round of the first Pre-Texts meeting, I came to see that allowing total freedom for questions does not spoil the course of the meeting. Instead, I was pleasantly surprised by the quality of questions and paths that they opened.

Pre-Texts left its mark on Buenos Aires. Now, we must continue working so that this single footprint becomes a path.