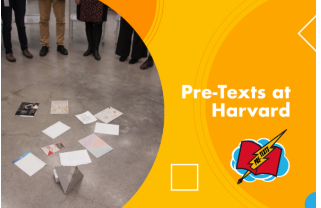 On December 4-5, 2017, a group of fifteen gathered at Harvard for a full Pre-Texts workshop dedicated to an excerpt from Michel Foucault’s Discipline and Punish: The Birth of the Prison. Reading the chapter, “Docile Bodies,” the group considered pedagogical systems and democracy in the classroom. Throughout the entire weekend, every “What Did We Do?” round returned to connections between Pre-Texts’ democratizing power and the text’s focus on mechanizing classrooms.

Facilitated by Nai Kalema, the workshop took place from 10am-1pm and 2pm-5pm on both Saturday and Sunday. John Vijay read the excerpt out loud as participants made book covers. Following the protocol, the group then wrote down their questions of the text and published them on the clothesline. Everyone was encouraged to take a question and gather in a circle, discussing their thoughts about the question they chose or someone else’s comment. It opened an insightful conversation about educational systems. Following that, the group broke down into teams of three to make statues, using any line from the excerpt. In several cases, it required many minutes of guessing and re-reading the text to find the right line. Afterwards, the group agreed that it would be ideal to choose a specific topic–whether it be a part of speech, rhetorical device, etc.–to act out in a classroom setting, giving students more guidance in their textual search.

After a lunch break, the group moved to the Harvard Art Museums. The first activity was a gallery tour of the current exhibit, “The Philosophy Chamber.” With fifteen minutes to explore the whimsical tools used by Harvard professors at the turn of the nineteenth century, each participant had to select one piece that reminded them of the text and then present it for the rest of the group. From stone rubbings to paintings to electro-shock machines, the chosen works gave unique insights into the text and into the exhibit. From there, the group moved to the museum’s M/Lab, reading newspapers and choosing articles for “going off on a tangent.”

The following day, the group convened in Boylston Hall. The first activity was called “Question Man,” inspired by comedian Steve Allen’s famous routine, where an audience member would provide a phrase and he would reply with a silly question to which the phrase was the answer. In the Pre-Texts version, the group posted lines from the text on a wall and then wrote goofy questions to accompany them. Following “Question Man,” the group made graphic novels based on the text, using recycled posters as the graphics. The final activity of the day was a peripatetic black-out poetry reading. Participants had to construct five haikus, one per paragraph, by blacking out the text and leaving only the words of the poems. The group then traveled outside and wandered through Harvard Yard, sharing their haikus out loud. The day ended in a discussion of how to make evaluations for Pre-Texts workshops in order to collect data and to learn how to improve facilitation.