In September 2020, Cultural Agents partnered with the Girls Global CoCreation Lab (GCL), led by Mercedes Balcells-Camps, to introduce Pre-Texts. Over six sessions on Sept. 12th, Sept. 19th, Sept. 26th, Oct. 3rd, Oct. 10th and Oct. 17th, approximately 25 members of the Girls GCL, which includes students ages 12-20 from Europe, Brazil and the United States, received 12 hours of initial training over zoom in the Pre-Texts methodology. The sessions were facilitated by Pre-Texts trainers Ari Mazzeo and Emilia Pfannl. During the training, the participants read and responded to texts, made art, participated in Forum Theatre, and planned and reflected on how to implement the practices in their schools, communities and everyday lives. 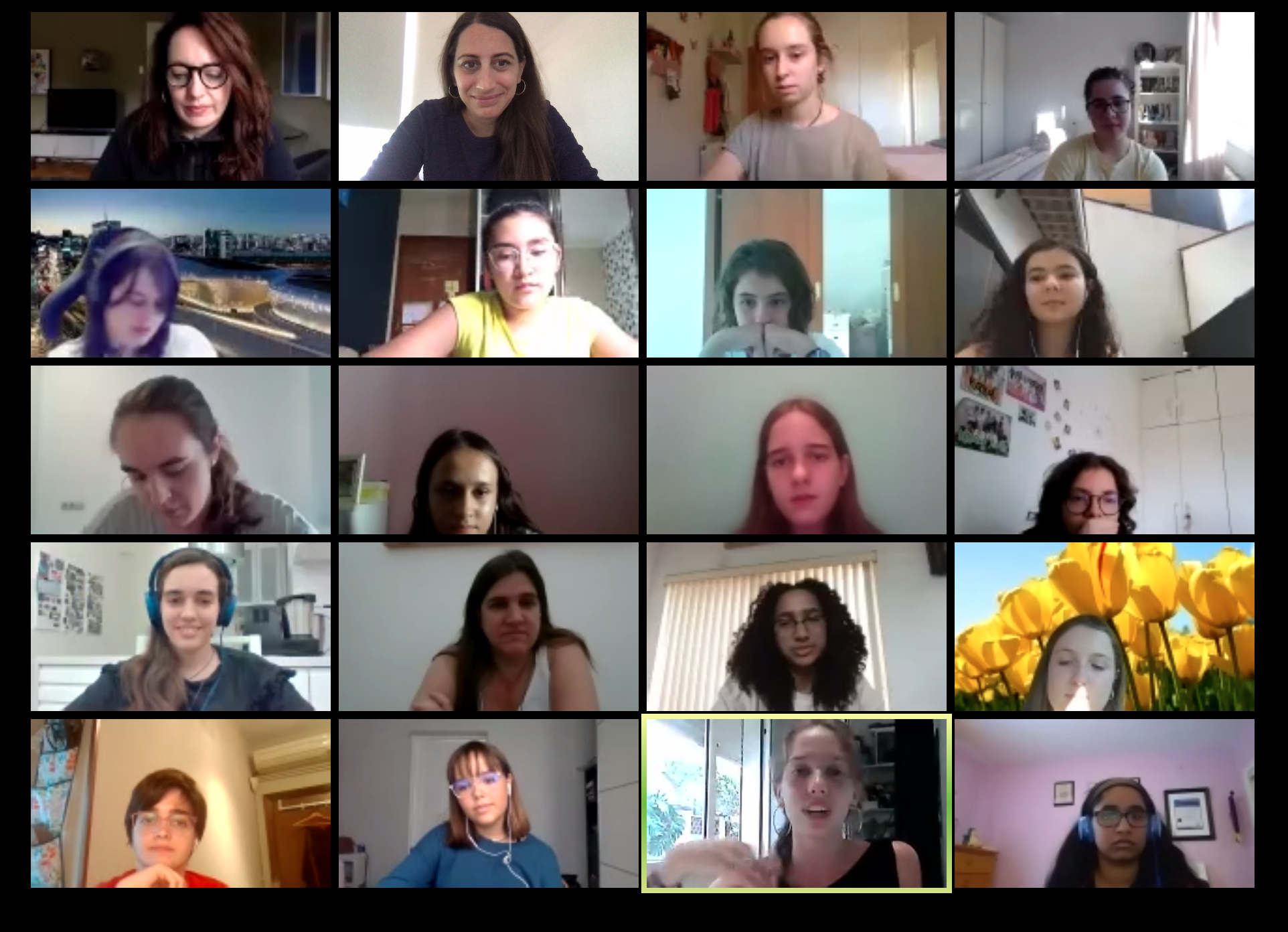 Pre-Texts is pedagogical acupuncture. With a single prompt: “Use the text to make art,” we activate both cognitive and emotional dynamics. The pleasures of playing with a challenging text (literary, scientific, historical, political, etc.) drive literacy, innovation, and citizenship like gears of a holistic system for development. Culturally diverse colleagues multiply perspectives, contribute arts, and deepen interpretation. Diversity is therefore admired rather than resisted. With Pre-Texts, intellectual and socio-emotional learning go together.

The first online session on Sept. 12th started with the creation of beautiful drawings while listening to an excerpt from the book The Old Drift by Namwali Serpell read by a volunteer reader. We then asked questions of the text in the chat (ranging from questions on the language, the content, the intent and more). Next, we delved deeper into the text through a fun round of charades, miming parts of the text while others read closely to find the lines being brought to life.

The next two sessions on Sept.19th and Sept. 26th were facilitated by Ari Mazzeo and focused on Forum Theatre. Participants were invited to participate in the co-creation of an original story inspired by the excerpt from The Old Drift. After the co-creation writing session, the Forum Theatre methodology was explained and participants worked together in groups to act out solutions to the different conflicts raised in the community.

Building on the Pre-Texts protocol, in the following two sessions, led by Emilia Pfannl, the participants became facilitators and designed their own lessons and proposed activities to do with the group. First, they went off on a tangent from the original text and brought in new texts including poems, songs, stories and nonfiction articles. After commenting on all of the tangents, as a group we chose one to focus for the Oct. 3rd session– The Real Africa: A Poem by Trishula Patel. For the Oct. 10th session, the participants chose a different tangent– The Nile River by Lilly Emery. The participants took turns being facilitators and proposed activities ranging from creating dances and songs to group sculptures and collaborative poems. They used the zoom breakout rooms to allow people to work together in groups and came up with unique and creative ways to share their work through screen sharing and screenshots. As always, the activities and sessions ended with a reflection to the question, ‘what did we do?’ where it was important for each person on the zoom call to speak once before speaking for a second time.

In the final session, participants worked in groups to brainstorm how they would incorporate Pre-Texts into their schools, communities and everyday lives. They shared their ideas with the larger group using drawings and collages. Ari and Emilia also reviewed the Pre-Texts  protocol with the participants and invited them to complete a survey on their experiences with the workshops.

“I learned that it doesn’t matter where you are from or what your color is, with Pre-Texts we’re equal and we can express our creativity in so many different ways in every text and everywhere.”

“We learned communication skills; how to work with others; how to be more observant; how to come up with activities to better understand certain texts, and so much more!”

“I got to know the pool of participants better. Working in a team and giving people freedom (and obligation) to speak/contribute has better results than one single individual working alone.”

“I became more confident and comfortable around my peers and also learned how to look for deeper meaning when analyzing literature. I learned how to take a more creative approach on the road to understanding.”

“I learned many things, but I think the most important takeaway is that everyone interprets everything differently and sees things through a different lens. Pre-Texts makes you a better citizen and teaches you to look at things from different perspectives and be observant.”

“Every opinion matters, there is no right or wrong. I learned how important it is to listen more.”