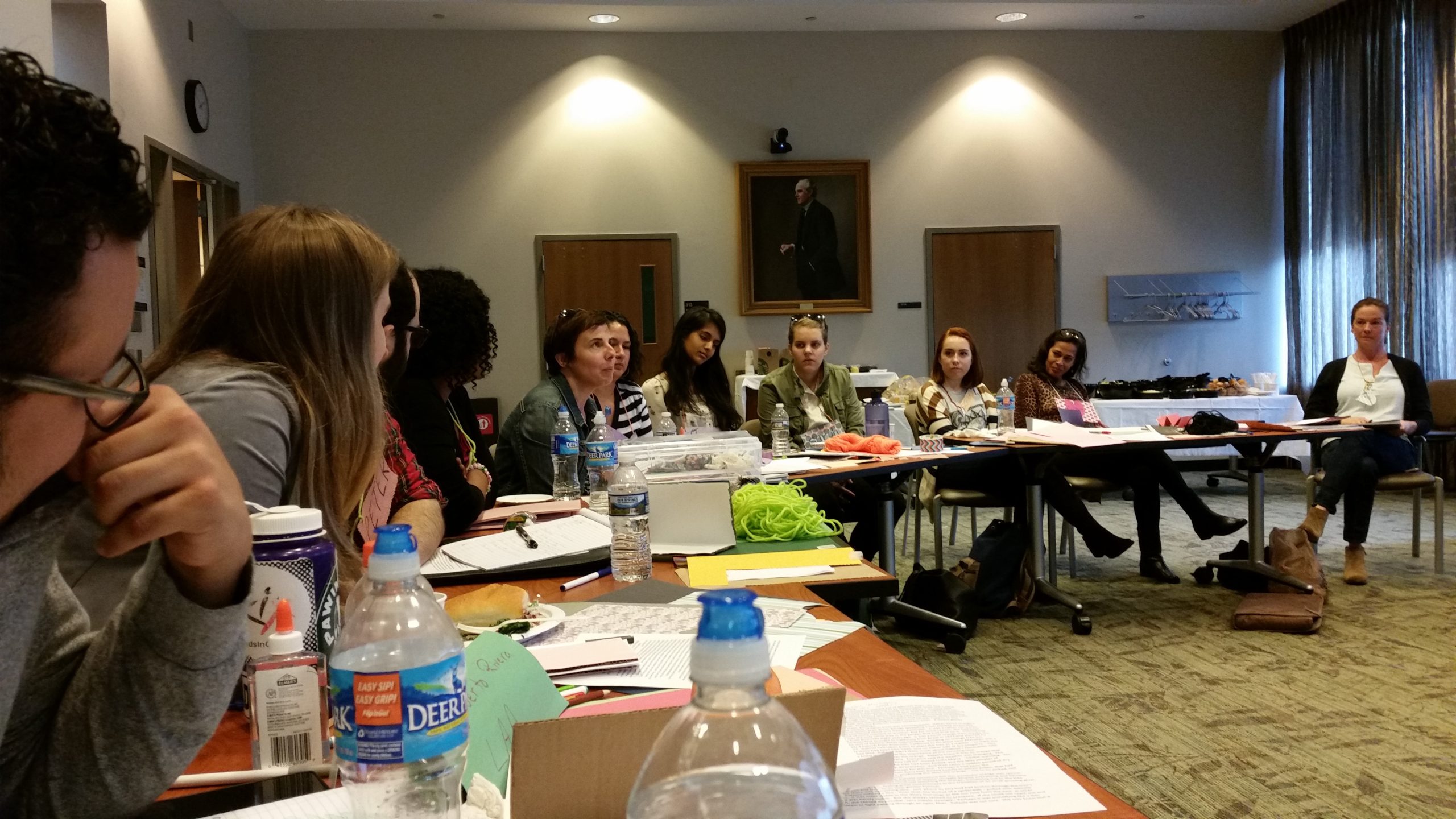 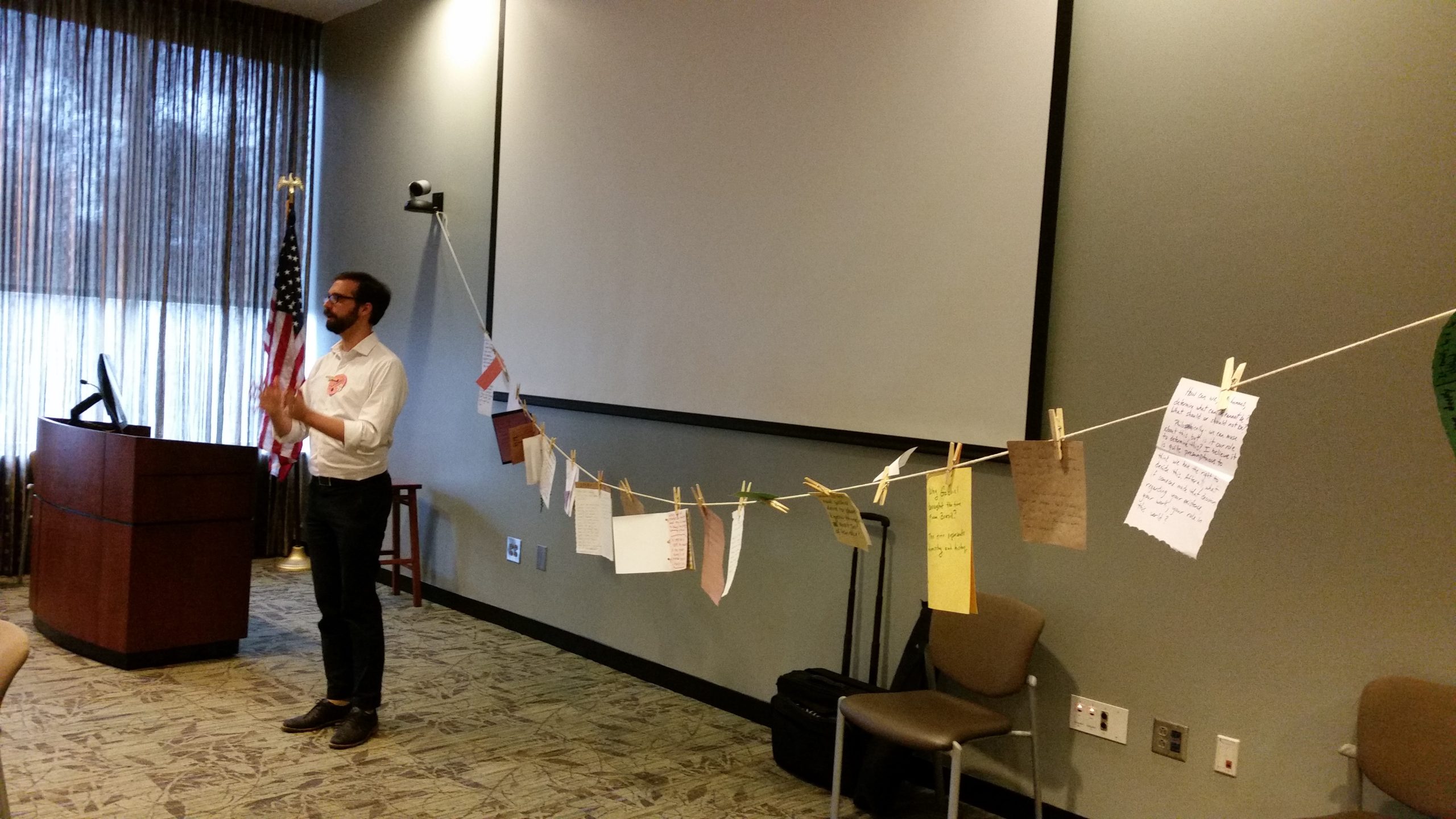 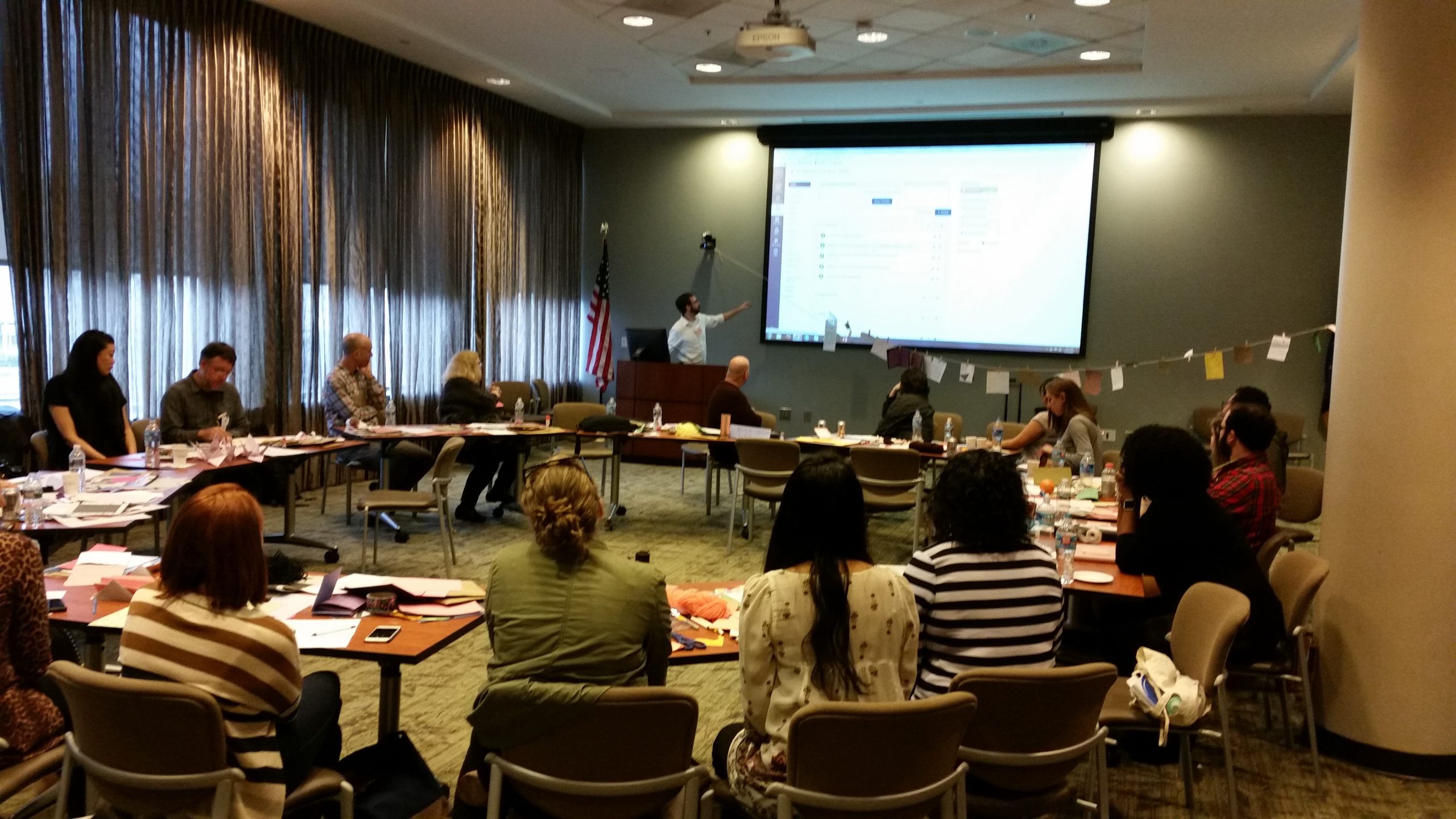 The setting: January 2017. A large room in the main library of the university, often used for lectures or university leadership meetings. Various art supplies and found materials are in small collections around the room and people are making hand-made name tags.

The characters: Around 20. Representatives of community-based organizations in the Buford Highway corridor of Atlanta (a community whose members come from many different parts of the world); undergraduate and graduate students; faculty members from Emory and one from nearby Georgia Institute of Technology; staff members who facilitate community engagement.

The opening scene: A “lector” reads a passage from Karen Tei Yamashita’s magical realist novel Tropic of Orange, ending with a description of an orange falling from a tree, crossing a barely visible line, in the process moving from private property to a public roadway. We create books as we listen. Then we pose questions to the text, propose answers to our questions or those of others, hanging them on a clothesline and reading each other’s questions and invented answers. One community partner has asked the stark question: “Is there a difference between private and public land?” She has written a bold and even starker answer: NO. When the “curator” of this “exhibit” asks the group which piece of writing they would like to know more about, this is the one that has caught the attention of multiple participants. They really want to know more.

This was the inaugural meeting of Emory’s first University-Partner Learning Community (UPLC), an innovative approach to community engagement that invites faculty, students, university staff members and community partners into the same conversation to create projects together. This kind of learning community is designed to encourage radical “full participation” by everyone involved in community-campus partnerships. Before we formally introduced ourselves, before we attached titles and roles to ourselves, before we established hierarchies in the usual way, we read part of a novel and played with it, together. We got to know each other through this Pre-Texts exercise before we did anything remotely similar to the usual formal introductions. The public/private land issue was the way we got to know the founder and director of We Love Bu-Hi, a very small non-profit focused on art interventions, some of which should, according to her, happen on private land with public attributes. A philosophical debate about the nature of public and private, with very real consequences for murals that might be painted on private property, occurred unexpectedly. However, the Pre-Texts protocol which we had established meant that once this community partner had explained her question and response, she then was prompted to identify someone else’s work that interested her.

In Pre-Texts fashion, we all heard from students, faculty, Emory staff members and other community partners about their engagement with the Tropic of Orange excerpt. In the process we began to relate to each other on a personal level while integrating that personal engagement with the reason for our meeting: to learn together how best to work together to address community needs. This in turn created a pathway to fairly quickly focus on the issues that community partners had on their minds, in tandem with the academic expertise and potential research questions of faculty members and students in the room. Both arenas were fully represented from the beginning. Thus began the pilot UPLC, a model that we are still developing and exploring.

For more information on Pre-Texts at Emory: