In June 2018, Pre-Texts facilitators Polly Lauer and Jahnvi Singh traveled to Coimbatore, Tamil Nadu in South India to begin a year-long Pre- Texts project with the CSI Girls Higher Secondary School (grades 6-12). After receiving an invitation from CSI Bishop Appasamy College of Arts & Science (BACAS) and the Church of South India, which operates a network of schools for poor children, the Pre-Texts team (Anshul Kumar, Lauer, Singh) secured a grant from Harvard University’s Lakshmi Mittal South Asia Institute’s Seed for Change grant program to work with a team of teachers in the school. Nestled in the Western Ghats, Coimbatore is famous for its textile legacy, with a deep tradition of handloom weaving that continues in its rural outskirts. Students at the school come from both the city and farther away communities, the latter boarding at the school’s on-campus hostel. Some teachers, as well, travel daily from cities up to two hours away.

The workshop began with an inauguration hosted by BACAS. Speeches given by the former secretary of the college, Dr. Susheila Williams; the CSI Bishop, Timothy Ravinder; and Pre-Texts Facilitator Polly Lauer focused on the importance of bringing creativity and local traditions into classrooms to establish a more democratic, student-centered environment.

Over the following days, seventeen teachers enjoyed “playing” Pre-Texts, reading an excerpt from Chapter 1 of The God of Small Things by Arundhati Roy. Hailing from a Tamil-speaking region, the group agreed that the excerpt was challenging not only in content but also in language, as English is their second language. It was an excellent example of how Pre-Texts is a literacy tool for learners at all levels, allowing learners to access a text at their own point of entry, whether the entry point be as basic as vocabulary definitions or as advanced as rhetorical flourishes. Given that many teach students through English language media, the experience of struggling through the text served as a useful insight into snags students hit in their English-language coursework. 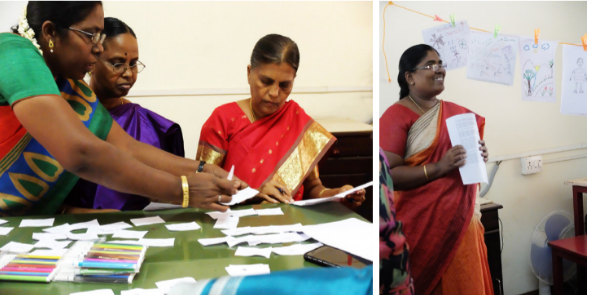 Encouraged to design activities based on the subjects they teach, the teachers employed math games, vocabulary hunts, and local songs to guide their peers in reading the text. When it came time to share “tangents” [a core element of Pre-Texts that invites participants to connect an external text to the workshop text], the teachers presented excerpts from their own textbooks– math, science, social studies, language–and explained connections they saw between Roy’s work and their own lessons.

On the final day, teachers designed lesson plans to implement Pre-Texts in their classrooms. After an editing session, when they offered comments and suggestions on one another’s lesson plans, each teacher demonstrated a customized version of their Pre-Texts activities to the group to gain more feedback.

Throughout the week-long training, Polly and Jahnvi were joined by Joanna David, the project’s “weaver,” who will be conducting follow up on the ground throughout the current academic year. A former educator and academic administrator, Mrs. David will be observing and meeting with teachers weekly, as well as guiding periodic assessments of students to determine the extent to which Pre-Texts has been used successfully in the classrooms.

Following the workshop, the team of two trainers and the weaver together conducted initial observations of teachers in their classrooms for one week and offered feedback for how to best

utilize Pre-Texts strategies in each teacher’s respective context. Although some teachers seem cautious about using Pre-Texts twice a week, instead of conventional teaching to the test, each has gained something unique from Pre-Texts, and their students are clearly elated at the opportunity to learn hands-on. The team also conducted baseline tests on 200 students at the school in grades 6-8 in both Tamil and English, as well as at a control group school that will not be using the Pre-Texts methodology (CSI Higher Secondary Matriculation School). Using these data, the Boston-based team will measure how Pre-Texts affects student performance over the course of the year.

A special thanks to Joanna David and Sheela John for hosting Polly and Jahnvi in Coimbatore and coordinating the India-based project details, to Dr. Susheila Williams for identifying Pre-Texts’ relevance in Coimbatore, to Anshul Kumar for maintaining the Boston side of the project during the trip, to the Lakshmi Mittal South Asia Institute for funding the program, and to Doris Sommer for mentoring this project.