When: June 27 to July 29, 2022
Where: Caribbean/Barbados (Remote)
Institution: Knowledge to Enable Your Success
Facilitator: Emma Fang 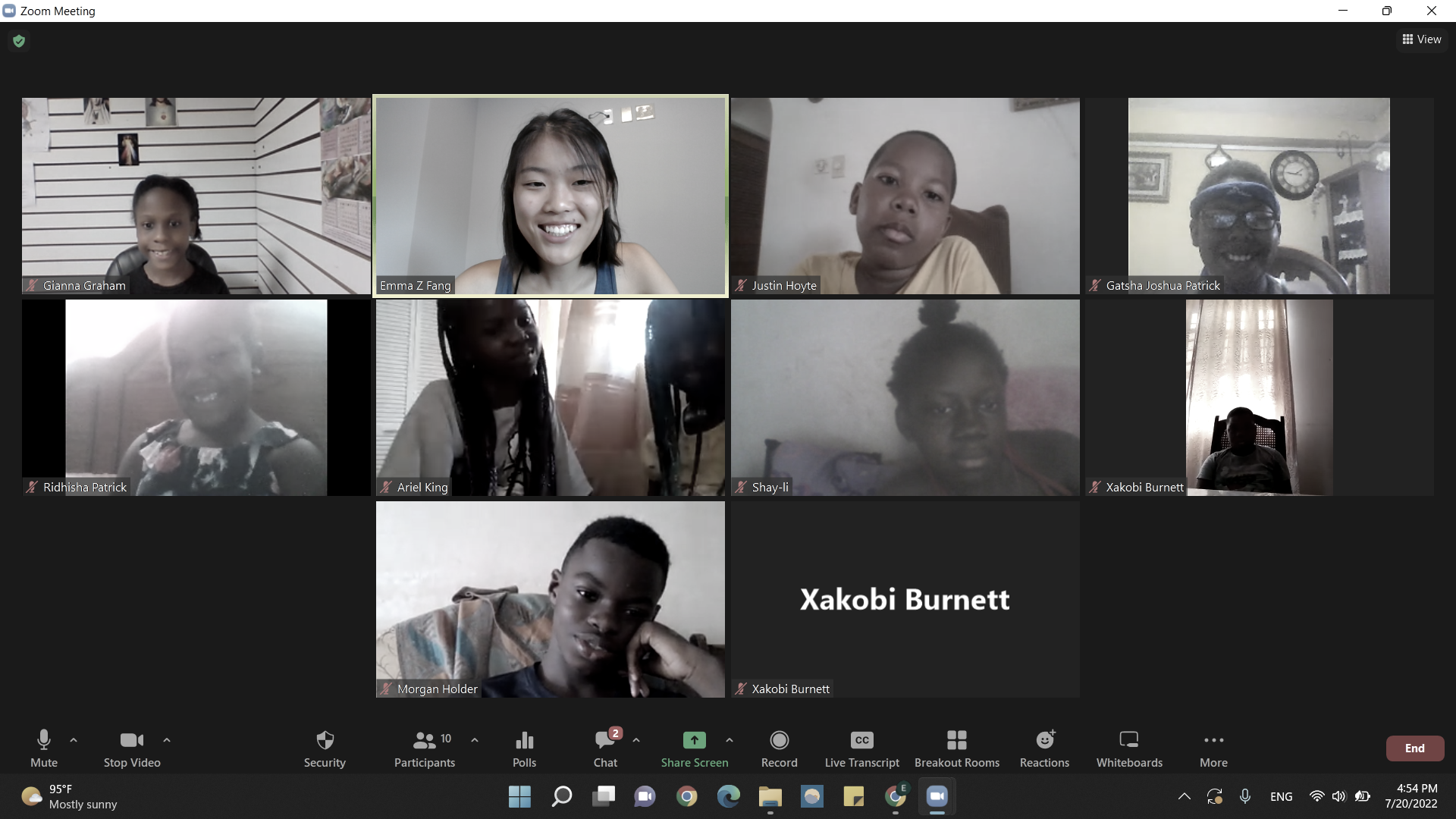 The first session was a learning experience. I was made aware of a number of complications that I didn’t entirely foresee. For example, the audio quality on some of the kids’ devices was rather poor, which is concerning because this presents challenges to effective and engaging communication and participation. I also did not anticipate that some of the kids would be zooming in together and that the name on their device would not always be their own. This, along with the fact that the kids don’t always have their faces clearly visible on the screen, makes it more difficult to attach names to faces. In addition, because I don’t have very much experience working with children, I am still getting a pulse for how to make this Pre-Texts program fun and enriching for them. In Pre-Texts, the text is supposed to act as a springboard for personal reflection and creativity, but I’m afraid that the kids are viewing it more as an authoritative source, as the questions they posed to the text were largely comprehension questions.

I am also trying to figure out how to time activities. During the Pre-Texts training sessions, we were generally given very little time to complete the activities (typically around four minutes), but I found that this was simply not enough for the kids, partially due to technological obstacles. However, I’m not sure I’ve struck the balance between giving the kids enough time to complete the activities and minimizing idle time for the group as a whole, and I hope to develop a better sense for this balance during the future sessions.

Very low turn-out today– only four kids in class! Having such a small group made the reflection circles a little less effective, I think. There were a few hiccups with the tangent activity, but the art-making activity for today (blackout poetry) ran rather smoothly. I’m also finding that asking the kids to estimate how much time they need to complete the activities is effective and increases engagement.

I feel that I am beginning to get a better sense of the kids’ individual personalities, and this is very fun and rewarding. The kids seem to be more engaged in the activities, although there are often still technical difficulties, so I am kept on my toes when it comes to figuring out different ways for the kids to complete the activities. Although the activities can still be a little rocky, the kids have a very good grasp on the Pre-Texts protocol for the reflection circles (answering “What did we do?” and choosing a peer to go next), and this is very rewarding to see. Overall, I’ve been very impressed with the kids’ participation, and I’m having a lot of fun teaching the sessions.

During session 5, we read a new text and did all the activities associated with it (posing a question to it and answering a classmate’s, finding a tangent text, reflection circles, etc.). At the end of the session, I asked for two volunteers to design and lead art-making activities for their classmates for the next session since a significant and unique part of the Pre-Texts pedagogy is passing around the facilitator role. During our training sessions, we had actually begun taking turns being the facilitator starting from the second session but given that the students in this class are much younger, I wanted to demonstrate and guide them through a larger variety of art-making activities before passing the baton. However, the two students were not in class today, so I had the kids do a leaf activity (finding a compelling excerpt from a part of the book we hadn’t read together and sharing why they chose it) and then improvised an art-making activity (blackout poetry with the new text). I will send out a reminder email before our final class, so hopefully the kids can run the last session, but I will also prepare a back-up activity in case it doesn’t work out. In any case, I’m continuing to have fun conducting the sessions and seeing what the kids come up with for the art-making activities!

For the last session, we did a final tangent activity, followed by the usual reflection circle, and an art-making activity that related both texts we had read (the kids who had volunteered to be facilitators on Friday were present, but they were shy about stepping into the role and I didn’t want to push them). The art-making activity consisted of making a postcard from the perspective of a character in one text to a character in the other text. The kids wrote a short message on one side of the postcard and then drew a related picture on the back and shared them out with each other before closing off with a final reflection circle.

Overall, I’m happy with the way the first session went. I believe I learned a lot about pace and communication when it comes to working with kids. The kids were also an increasing joy to have in class, as they became more and more comfortable participating, sharing out, being creative, and engaging with their classmates and myself. For the next round, since the kids will be slightly older, I’m hoping I’ll be able to successfully pass the baton as a facilitator during the program, and I’m also hoping there will be fewer technical difficulties since these continued to disrupt the activity flow a bit all throughout the first session.

Things that I think went well during this first session: the kids were very eager to participate and showed a lot of curiosity, and it was super fun to engage with their questions and see them engage with each other.

Things that could have gone better: many of the students joined late, and we spent some time in the beginning waiting for more people to show up, which was unfortunate for the kids who were there on-time. On the other side, it was difficult for the students who joined late to catch up with us and participate in the activities, and I’m always conflicted about how to manage these situations– how much should I prioritize getting everyone on the same page v.s moving the class along efficiently and respecting the time of the timely ones.

Overall, though, I’m excited about this group since they’ve already shown themselves to be thoughtful and engaged individuals. Hopefully, I will be able to pass down the facilitator role during this session.

Near-full attendance today, and the kids were very timely! Both activities and reflection circles also ran quite smoothly.

Kids were timely, so we were able to get started right away once again. Some hiccups with the tangent activity– trouble copying and pasting, and some kids had unfortunately missed the first session where we had read the central text, which is difficult since it serves as the basis for all the subsequent activities– but the art-making activity went really well. Kids were thoughtful and engaged as always. I especially enjoyed seeing them bounce off of each other’s ideas in the chat! They are also beginning to master the reflection circles– having an easier time answering the question and remembering to nominate a classmate to go after them.

Fun class today– I think the kids enjoyed the art-making activity. We did two versions of the same activity–one was more of a written exercise while the other was visual, and the activity had three parts to it. I facilitated the written activity first and did this by explaining all three parts to it at the same time and sending them off to complete them all together. However, I found that many kids then had clarifying questions about the different parts, and I believe introducing the activity in full led to a less efficient execution than if I would have explained the first part and had them complete it and share out before moving onto the second and third parts. I implemented the visual version of the activity in this way, and as suspected, the kids had a much easier time understanding the activity, and the second half of the class was much more engaging (and fun!) for all.

Introduced a new text today. The kids asked wonderful questions, as always. I also opened up the facilitator role to the kids for our final two classes, and we had two very enthusiastic volunteers, so I am super excited to see what they come up with.

One of the students– Gianna– led the class today and did a wonderful job. Although I had expected that she would just design an art-making activity related to the text I had introduced on Monday, she actually picked out a new text for us by herself, which she read out loud, and I was very excited by the initiative she took in this. She then had us ask and answer questions of the text before launching us into our routine reflection circle. We then completed a tangent activity. Gianna was very good at answering clarifying questions her peers had all throughout the class.

Final class! Another student– Gatsha– introduced us to a new text, had us ask and answer questions about it, and then facilitated a vocabulary and drawing activity. It’s crazy that I am done leading Pre-Texts courses for this summer, but I am overall very happy with how the two sessions went. I feel much more comfortable interacting with kids. Not only that, but I feel that I have a better sense of how kids think and a greater appreciation for their creativity, curiosity, and silliness. I believe I’ve learned a thing or two about communicating effectively, designing engaging activities, and troubleshooting on my feet as well. Overall, I am very grateful I had this experience and would definitely want to implement Pre-Texts programs again next summer.