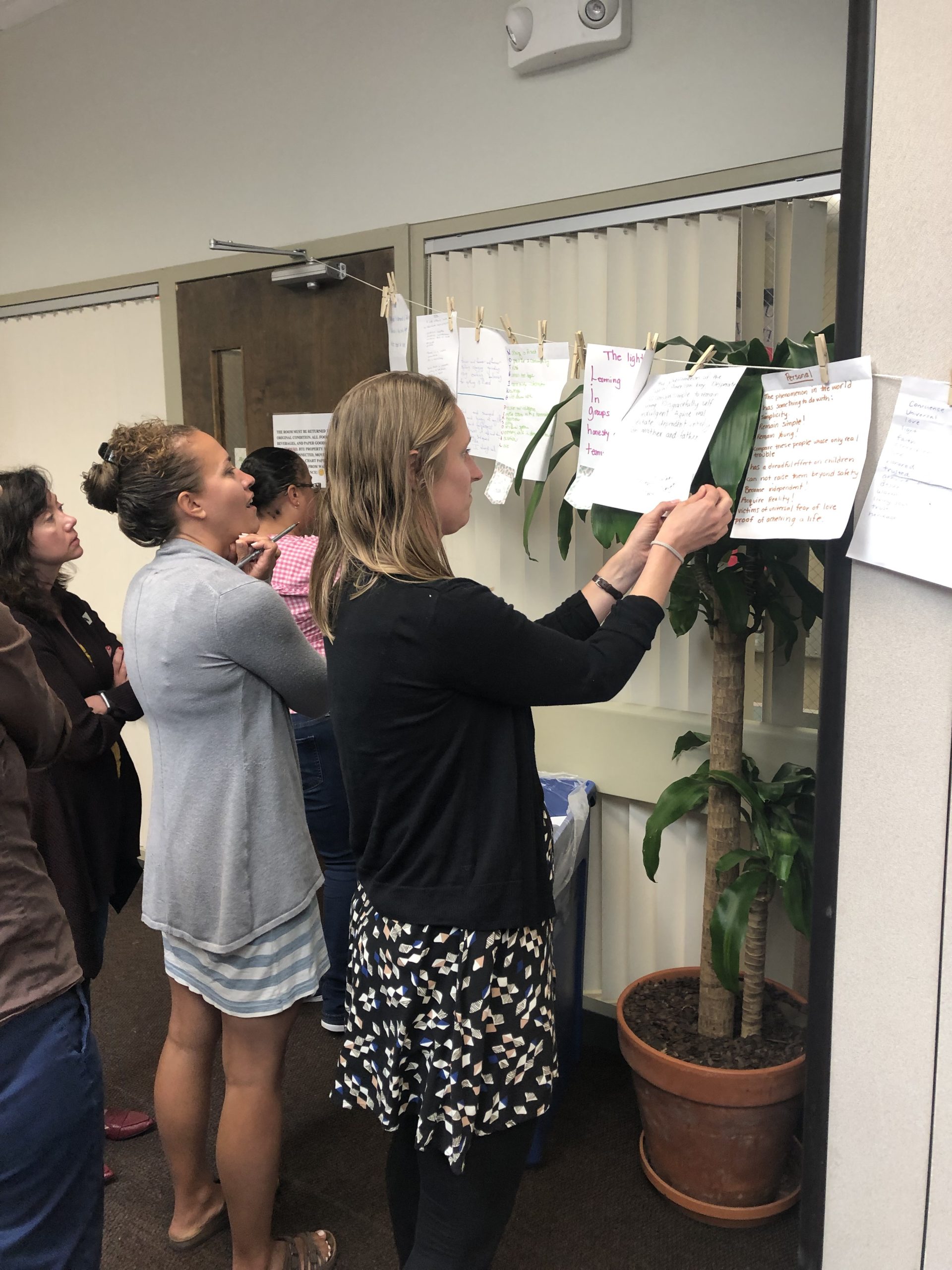 “One day, perhaps, unimaginable generations hence, we will evolve into the knowledge that human beings are more important than real estate and will permit this knowledge to become the ruling principle of our lives.” ~ James Baldwin, Nothing Personal (1964)

Cultural Agents partnered with Boston Public Schools (BPS) to introduce Pre-Texts in elementary and middle school classrooms at the Perry School in South Boston and the Adams School in East Boston. This study—an evaluation of a school-based intervention designed to boost student engagement and literacy using Pre-Texts, an integrated arts-based pedagogy—aims to showcase one pathway for addressing cumulative adversity among urban youth.

This research is conducted as part of a multi-year study of “Multidimensional Inequality in the 21st Century: The Project on Race, Class and Cumulative Adversity” (a.k.a., The Cumulative Adversity Project), based at the Hutchins Center for African and African-American Research at Harvard University. The Cumulative Adversity Project, led by Harvard University Professor William Julius Wilson, conducts collaborative and concurrent research studies that seek to “yield a broader understanding of poverty and inequality in America, and evidence-based policy recommendations to address it.” The motivation for this overarching initiative is predicated on the fact that the tangle of adversities that are commonly referred to as “poverty” or “disadvantage” often remains opaque or largely misunderstood for the majority of Americans. In order to broaden awareness and understanding, the initiative focuses on a number of concurrent research and demonstration projects that seek to evidence the interlocking processes that perpetuate and prolong disadvantage, especially racial inequality. As such, a focus on academic attainment and school engagement offers a unique opportunity to address an important predictor of persistent poverty.

Operationally, the Cumulative Adversity Project employs a broad framework, whereby a number of unique but inter-related initiatives are implemented concurrently. Similarly, the Project prioritizes the integration of numerous research perspectives and theoretical considerations to allow for a sophisticated and multifaceted analysis of contemporary urban life, one that informs and extends our understanding of cumulative disadvantage and ways to combat it. This study serves as an independent but integral component of the larger initiative. 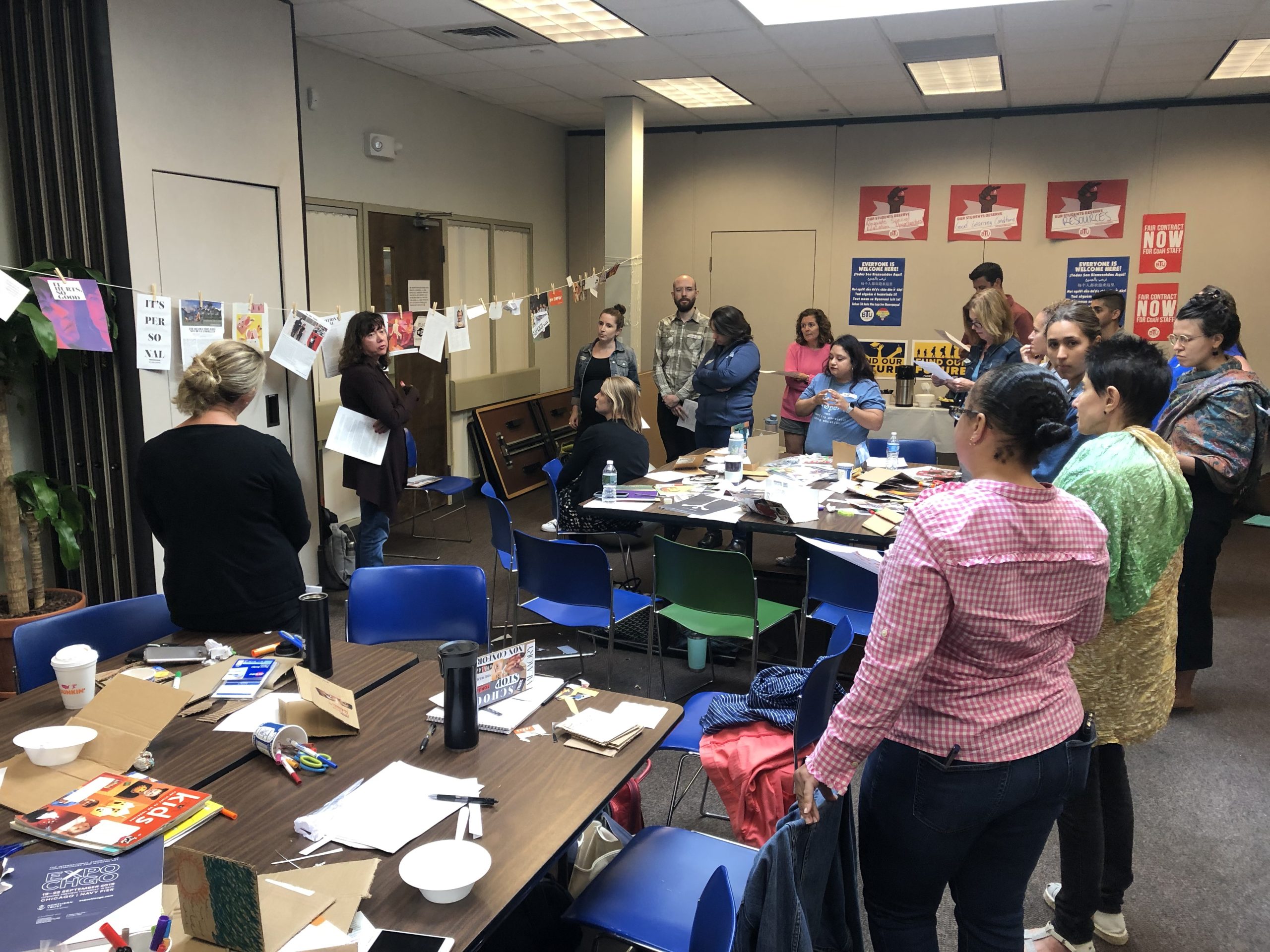 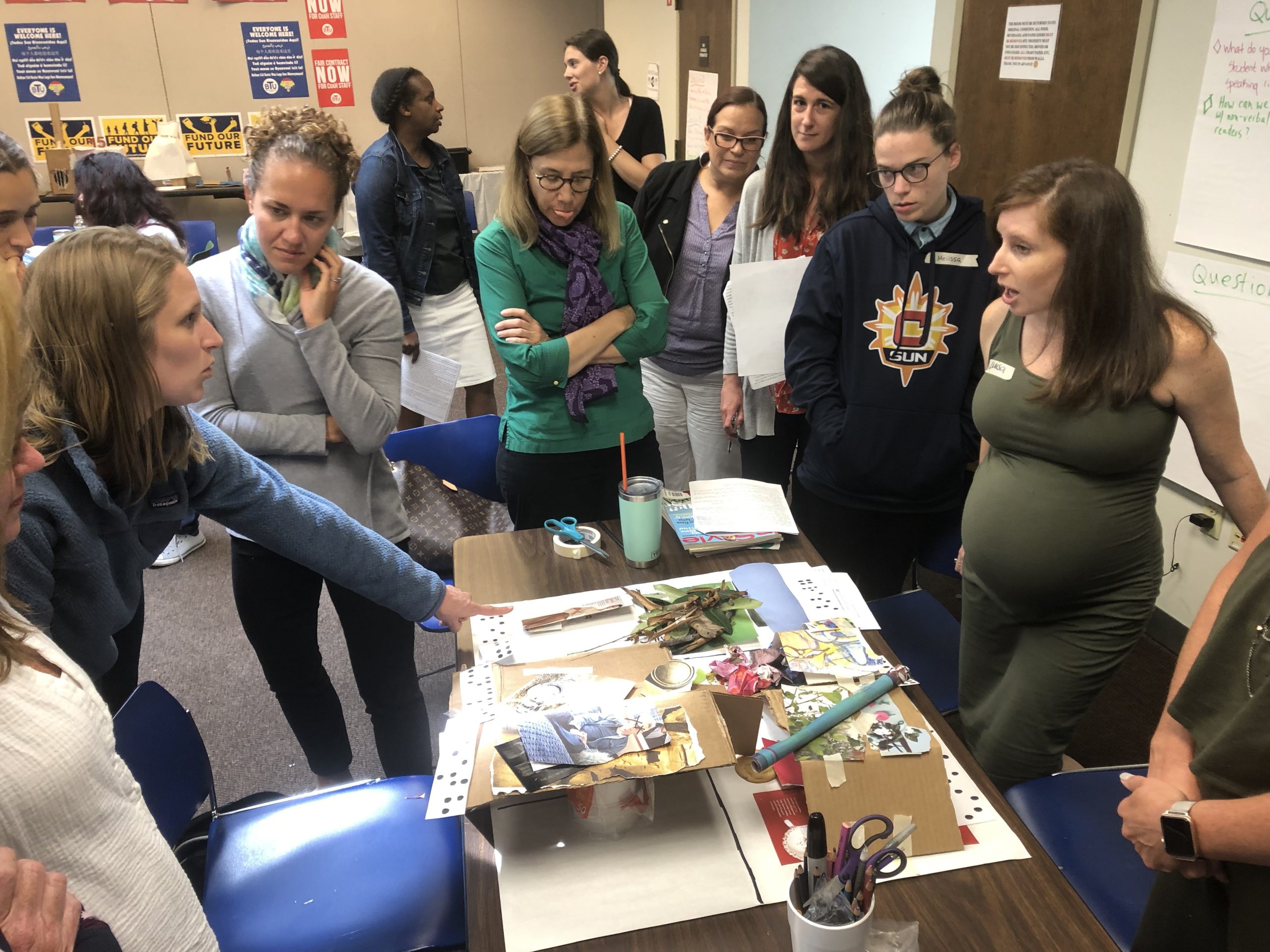 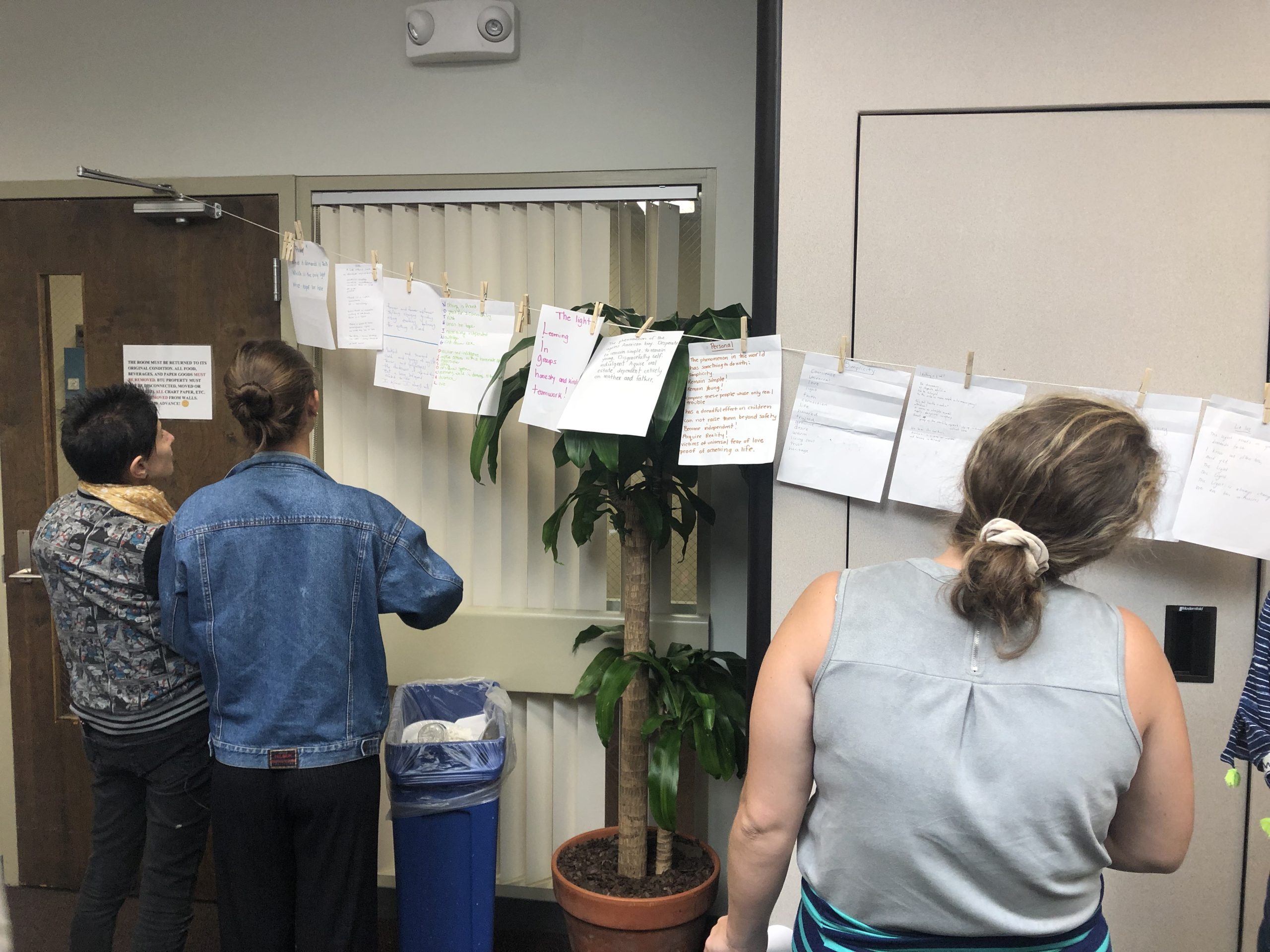 Over three sessions on August 26th, 27th and 29th, 2019, Boston Public School teachers and principals from the Perry School and the Adams School received 15 hours of initial training in the Pre-Texts methodology. During the training, they read and responded to texts, made art, and planned, reflected on, and discussed the implementation of the practices in the classroom with their students.

In true Pre-Texts style, the first of the sessions started with the creation of beautiful and colorful cartonera style cardboard book covers while listening to an excerpt of the text Nothing Personal by James Baldwin read by a volunteer reader—this is a tradition from the tobacco factories across Latin America. We then asked questions of the text (ranging from questions on the language, the content, the intent and more). Next, we delved deeper into the text through a fun round of charades, miming parts of the text in groups while others read closely to find the lines being brought to life. Building on the Pre-Texts protocol, the participants then became the facilitators and designed their own lessons and proposed activities to do with the group, which continued in the subsequent sessions.

In the second session, we listened as a volunteer reader read the first chapter of Esperanza Rising by Pam Muñoz Ryan, a text that many of the teachers often teach in their classrooms. The new facilitators proposed activities ranging from spoken word and poetry to building with cardboard and making posters with collage and found objects to making rhythm and beats to go with themes found in the text. As always, our activities and sessions ended with a reflection to the question, ‘what did we do?’ where it was important for each person in the circle to speak once before speaking for a second time.

In the third and final session, participants worked in groups or individually to brainstorm how they would incorporate Pre-Texts into their curricular units. They designed sample lesson plans and shared their ideas with the larger group.

Participating teachers will continue to receive weekly support throughout the school year by meetings with certified Pre-Texts coaches. In exchange, participating teachers will be integrating Pre-Texts curriculum activities into their classroom instruction each week. The weekly check-ins with Pre-Texts coaches will be opportunities for participants to receive continued training, reflect on implementation and plan for continued implementation.

The Cultural Agents Initiative is a network of academics, artists, educators, and organizations who develop recognition of the arts as resources for positive change. Cultural Agents kindle our innate human creativity to revive a long humanistic tradition that combines arts and research in the service of civic development.

Cultural Agents enhance rights and resources by supporting the creativity of underserved populations. Change requires imagination, thinking like an artist, so we study exemplary agents to train educators and other leaders in creative processes.

Pre-Texts is pedagogical acupuncture. With a single prompt: “Use the text to make art,” we activate both cognitive and emotional dynamics. The pleasures of playing with a challenging text (literary, scientific, historical, political, etc.) drive literacy, innovation, and citizenship like gears of a holistic system for development. Culturally diverse colleagues multiply perspectives, contribute arts, and deepen interpretation. Diversity is therefore admired rather than resisted. With Pre-Texts, intellectual and socio-emotional learning go together.

Doris Sommer, Director of the Cultural Agents Initiative at Harvard University, is Ira and Jewell Williams Professor of Romance Languages and Literatures and of African and African American Studies. Her academic and outreach work promotes development through arts and humanities, specifically through Pre-Texts in Boston Public Schools, throughout Latin America and beyond. Pre-Texts is an arts-based training program for teachers of literacy, critical thinking, and citizenship. Among her books are Foundational Fictions: The National Romances of Latin America (1991) about novels that helped to consolidate new republics; Proceed with Caution when Engaged by Minority Literature (1999) on a rhetoric of particularism; Bilingual Aesthetics: A New Sentimental Education (2004); and The Work of Art in the World: Civic Agency and Public Humanities (2014).  Sommer has enjoyed and is dedicated to developing good public school education. She has a B.A. from New Jersey’s Douglass College for Women, and Ph.D. from Rutgers University.

Suzanne Paszkowski is a PhD student in the Harvard Classics Department, specializing in ancient philosophy and literature. Her dissertation is about  the aesthetics of addiction in the ancient Greek and Roman worlds. Prior to starting the program at Harvard, she completed her Bachelor of Social Sciences (Specialization in Political Science) at the University of Ottawa in Canada, as well as two Master of Arts degrees (one in Political Science, one in Classics) at McGill University in Montreal. She has also worked in art museums in Ottawa, Los Angeles, Boston, and Athens. Through her work, she tries to bring ethics, art, and politics into dialogue. She first got involved with Pre-Texts in the Spring of 2019, and is very excited to be bringing it into her own work as a teacher and pedagogical fellow at Harvard’s Bok Center for Teaching and Learning, as well as in collaboration with the teachers at the Perry School in South Boston.

Emilia works at the Cultural Agents Initiative at Harvard and is a K-12 Spanish content curriculum developer for the New York City Department of Education. Prior to moving back to the United States two years ago, Emilia was teaching at the Universidad Nacional de Asunción in Paraguay and coordinating a community technology center that promotes digital and social inclusion with the NGO Paraguay Educa. Emilia has worked with community and nonprofit organizations in New York, Bolivia and Paraguay on issues of early childhood education, arts education, literacy, participatory action research and bilingual education. She was also a New York City Teaching Fellow and an elementary school teacher for four years in East Harlem and has taught graduate courses at CUNY Hunter College in special education and curriculum development. Emilia holds a B.A. in Social Thought and Political Economy from the University of Massachusetts Amherst, an Ed.M. in International Education Policy from the Harvard Graduate School of Education, and a Master’s in Special Education from CUNY Hunter College.